Equinor ASA (EQNR - Free Report) recently announced the completion of a deal to finance the massive Dogger Bank wind farm. The deal supports the first two phases of the renewable project, which is located in Britain. The company has SSE Renewables as its joint venture partner in the project.

The wind farm will have a total capacity of 3.6 gigawatts (GW) upon completion. The overall project is divided into three phases of 1.2 GW each. The first two phases, Dogger Bank A and B, are expected to be built simultaneously to capture synergies. The overall project is touted to be the largest offshore wind farm in the world. The project site is located 60 miles off England’s North East coast.

While SSE Renewables will lead the construction works at the site, Equinor is likely to head up operations. It is expected to enable the companies to provide power to 6 million British homes. Notably, onshore works for the project have commenced in early-2020. The investment amount for the first two phases is expected to be £6 billion (around $8 billion). A total of 29 banks and three export agencies are financing the Dogger Bank A and B phases.

The overall renewable project is expected to come online by 2026. It received financial support from the British government last year. In a crucial move, Equinor has also made power purchase deals with several clients for the project.

The latest deal on Dogger Bank wind farm is in line with Equinor’s key strategy to capitalize on the renewable energy space and align its operations with the Paris Climate Agreement. Notably, the company generates sufficient energy from wind farms located off the coast of Germany and the United Kingdom to power more than one million homes in Europe. Moreover, outside of Europe, Empire Wind is the first wind project of the company. The offshore wind farm in New York is producing up to 2000 megawatts of electricity.

Importantly, it has plans to become a net-zero greenhouse gas emitter by 2050. Moreover, by 2035, it aims to boost the capacity of renewable projects to 12-16 GW.

Equinor’s stock has increased 9.8% in the past six months compared with the 13.4% rise for the industry. 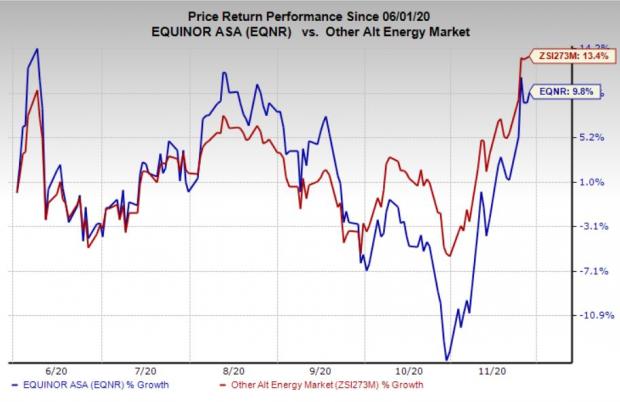 Covanta Holding’s bottom line for 2021 is expected to rise 95.3% year over year.

Germany Goes All in On EVs: VWAGY, BAMXF and DDAIF in Focus