Earlier this month, after entering a deal to sell its U.S. business to The PNC Financial Services Group, Inc. (PNC - Free Report) for $11.6 billion in cash, Banco Bilbao was in talks to purchase Sabadell with the cash generated. The deal would have created the second-largest domestic bank in Spain.

However, per people familiar with the matter, Sabadell wasn’t satisfied with the price that Banco Bilbao was offering. Even though Banco Bilbao did raise its bid slightly, it could not match up to Sabadell’s expectations and hence the talks collapsed.

Despite this, shares of Banco Bilbao gained more than 4% on the NYSE following the news.

Notably, Banco Bilbao’s CEO, Onur Genc, has already stated that the lender is in no hurry and will only pursue a deal if it adds value for shareholders.

In fact, the merger with Sabadell was just one of the options for utilizing the cash generated from the deal with PNC Financial.

Banco Bilbao is also considering share repurchases as an alternative to utilize the capital.

Likewise, Sabadell is now planning to shift focus toward developing its retail business in Spain. The company will likely analyze alternatives for its international assets, including the U.K. unit TSB.

Due to the continued concerns relating to the impact of the coronavirus on financials, companies are exploring alternative options to remain in the business. Particularly, there has been a rise in consolidation within the finance sector of late.

While on one hand, banks and assets managers in the United States are engaging in mergers to remain profitable and expand business amid the pandemic, companies in Spain are fighting negative interest rates and hence are looking for ways to reduce costs.

A couple of notable deals, which were concluded recently in the United States, include Charles Schwab’s (SCHW - Free Report) acquisition of TD Ameritrade Holding for $22 billion, which created a behemoth in the online brokerage space.

Similarly, Morgan Stanley’s (MS - Free Report) acquisition of E*TRADE Financial in an all-stock deal worth $13 billion is likely to position it as a leader in the Wealth Management industry across all channels and segments, with a significant increase in the scale and breadth of its franchise.

Shares of Banco Bilbao have gained 45.8% over the past six months, outperforming 28.2% growth recorded by the industry. 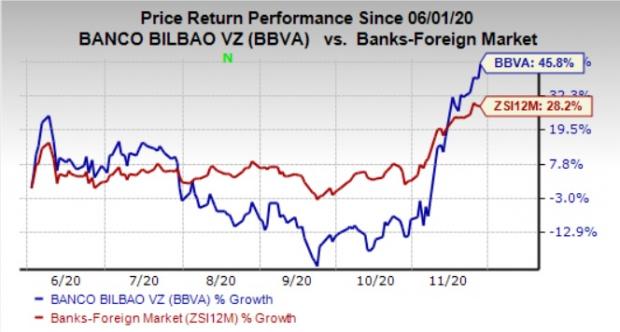