Please note that that the Symkevi and Kalydeco combo regimen is already approved for treating CF patients aged 12 years or older with same mutations.

The combination regimen will be available for additional eligible patient population immediately in Germany followed by the United Kingdom, Denmark and the Republic of Ireland. The company will start working closely with relevant authorities in Europe for securing access to the regimen for the new patient population in other countries of the European Union.

Shares of Vertex have increased 3.5% so far this year compared with the industry’s 3.1% gain. 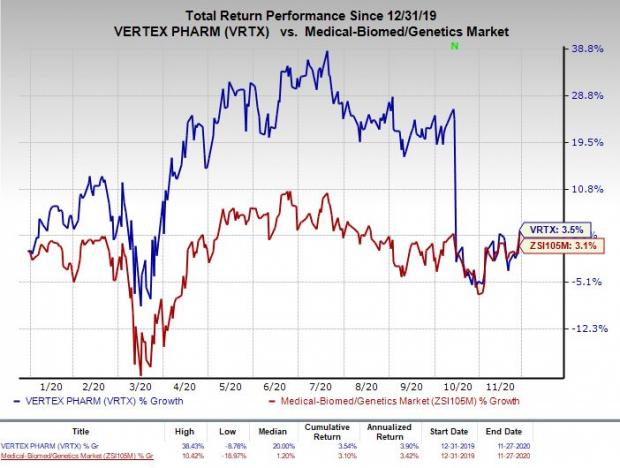 We note that Vertex markets four CF medicines, namely Kalydeco, Orkambi, Symdeko/Symkevi and Trikafta. Approximately 45,000 patients worldwide are now eligible to be treated with one of Vertex’s four CF medicines.

Notably, Trikafta is crucial for Vertex’s long-term growth as it has the potential to treat up to 90% of CF patients. Trikafta was approved under the trade name of Kaftrio in the EU in August 2020. The drug generated sales worth $2.8 billion in the first nine months of 2020. It has seen solid uptake since its early unveiling and has been a key driver for the company ever since.

Meanwhile, phase III studies are ongoing to evaluate Trikafta in children aged six to 11 years. An sNDA seeking approval for the product among this pediatric patient population is expected to be filed in the fourth quarter of 2020. The recent nod in Europe and a potential label expansion of the drug for younger patient population could bring additional revenues for Vertex this year as well as in 2021.

Is Molina Healthcare (MOH) a Worthy Pick for Value Investors?