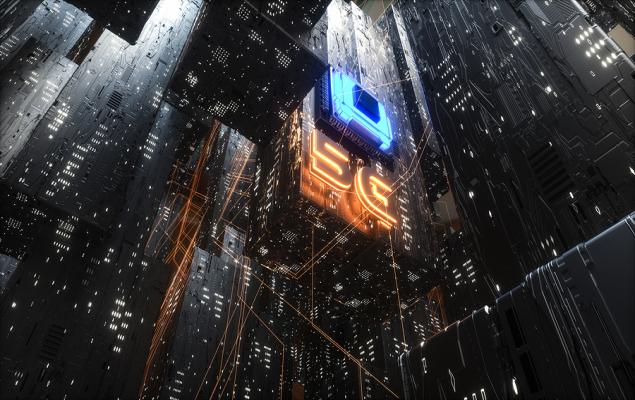 The U.S. telecom stocks witnessed a roller-coaster ride in the past week with intense market volatility, as a rally driven by broad-based expectations of an early arrival of the coronavirus vaccine by the year end were negated by tough government stance against China-based Semiconductor Manufacturing International Corp (“SMIC”). With embargoes against SMIC potentially harming the prospects of several domestic firms, negative vibes surrounded the industry, which was largely pinning hopes on the resumption of normal business operations post COVID-19 era. In addition, rising cases of fresh infections sweeping across the country proved to be a spoilsport, dampening the festive spirits of the holiday season.

The Trump administration has designated a fresh list of China-based companies to its blacklist on suspicions of having a close association with the military, thereby harming the U.S. national security interests. SMIC — the largest chipmaker of China — is a notable inclusion in this list. This is likely to cripple its supply chain mechanism and further jeopardize its business that has been hard hit by the export restrictions already in place. This, in turn, is likely to affect the production schedule of several U.S. firms, including Qualcomm Incorporated, Broadcom Inc. and Texas Instruments Incorporated.

The Congress passed The Holding Foreign Companies Accountable Act — a new audit law that is likely to force China-based firms to delist from American exchanges unless they comply with U.S. accounting rules. The legislation takes an assertive stance toward Beijing and encourages more market access to national security concerns related to spying and technology supply chains. The uncertain business environment was further heightened by the news of Ajit Pai vacating his post as chairman of the Federal Communications Commission on Jan 20, 2021. Pai was largely defined by a pro-industry stance as exemplified by his role in repealing the net neutrality law that enabled telecommunications firms to block or throttle Internet traffic. The departure of the chief U.S. telecom regulator is therefore likely to create a temporary void.

Meanwhile, a federal appeals court has scheduled to hear oral arguments of the government plea that aimed to ban the download of TikTok from U.S. app stores. Notably, the White House is seeking a ban on TikTok, WeChat and other Chinese apps that are allegedly being used as cyber espionage tools to gain access to sensitive American data. However, an appeals court recently rejected a government appeal seeking immediate ban of such downloads from U.S. app stores. This has offered an opportunity to the video sharing app to continue operating in a country with more than 100 million users.

The transformative deal is likely to redefine the dynamics of the automotive sector. Despite running within a vehicle’s embedded systems, Blackberry IVY will be managed and configured remotely from the cloud, offering automakers greater visibility and control over it. The standardized platform with integrated capabilities will facilitate automakers to share data and outputs with developers and outside technology partners without fear to deliver new features, functionality and performance-enhancing attributes. This is likely to unlock new revenue streams and business models built on vehicle data without compromising on customer privacy and security by controlling the access to vehicle and app data.

2.     Ericsson (ERIC - Free Report) has secured a five-year 5G core deal from WIND Hellas, covering both the standalone and non-standalone modes of the technology. WIND Hellas is an integrated telecommunications service provider with headquarters in Athens, Greece. Ericsson currently has 70 live 5G networks in 36 countries and 117 commercial 5G agreements with operators.

The Sweden-based telecom equipment provider will modernize WIND Hellas’ 2G/3G/4G packet core and signaling infrastructure. The technology will enable the operator to deploy its first standalone 5G network. Ericsson will install the dual-mode 5G core with full support services, which will allow WIND Hellas to meet customers’ increasing demand for data and pursue new opportunities in the enterprise segment.

3.     Nokia Corporation (NOK - Free Report) recently secured a contract for an undisclosed amount to deploy critical infrastructure solutions for Airtel Kenya. In addition to improved network performance by upgrading the existing service capabilities, the solutions are likely to sow the seeds for future 5G service offerings of the Kenya-based operator.

Airtel Kenya will leverage Nokia’s AirScale portfolio to improve its connectivity with wider indoor and outdoor coverage driven by its high quality base stations and radio access products. The AirScale radio access products deliver low-latency, high-capacity mobile connectivity with low cost of ownership. The products can be easily upgraded through a software update and help to reduce network complexity. This, in turn, will facilitate the operator to upgrade the existing network facilities for a seamless transition to 5G, when necessary.

4.      ADTRAN, Inc. (ADTN - Free Report) has expanded its portfolio of NetVanta access routers to deliver better speed and capacity for fiber-based IP connectivity to enterprises. The company continues to optimize its customer and product diversity as communications service providers scale up their network capabilities.

The NetVanta 3148 and 4148 routers combine a range of capabilities into one platform for more flexibility and better price performance. These solutions make it easier for managed service providers to bundle and deliver competitive business services.

5.      Orange S.A. (ORAN - Free Report) has launched a 5G network in 15 municipalities in France, including Nice, Marseille, Le Mans, Angers and Clermont-Ferrand. By the end of 2020, the service provider plans to cover more than 160 municipalities with 5G. 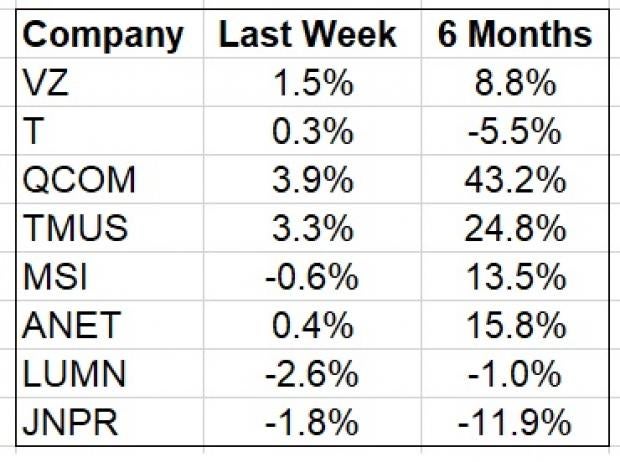 Over the past six months, the Zacks Telecommunications Services industry has rallied 6.2% on average and the S&P 500 has gained 18.1%. 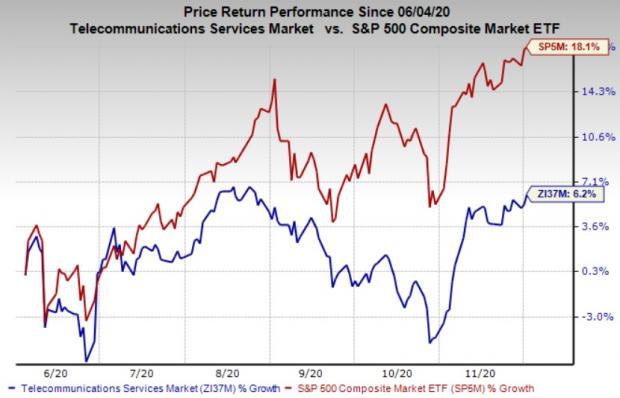