Abbott Laboratories (ABT - Free Report) recently received the approval from Health Canada for its next-generation FreeStyle Libre 2 system for diabetics above the age of four. The regulatory approval makes the sensor-based glucose monitoring technology eligible for use for diabetics living in Canada. For investors’ note, Abbott is planning to launch the system in Canada in the coming months.

The FreeStyle Libre 2 system is equipped with features like optional real-time alarms that measure glucose levels every minute and can alert users regarding critical events such as hypoglycemia (low glucose levels) or hyperglycemia (high glucose levels) in real time. Further, the sensor, which has a 14-day wear time, eliminates the need for painful fingersticks to monitor glucose levels.

Notably, Abbott had launched the first disposable glucose sensor in 2014 and has been working toward making high-quality, accurate and affordable diabetes technologies available to every diabetic.

Investors should note that Abbott has secured partial or full reimbursement for the FreeStyle Libre portfolio in 37 countries, including Canada, France, Germany, Japan, the United Kingdom and the United States.

With the latest approval, Abbott aims to fortify grounds in the global continuous glucose monitoring (“CGM”) market, thereby boosting the Medical Devices segment. The FreeStyle Libre portfolio is a component of the company’s diabetes care business.

The FreeStyle Libre 2 system, with a one-second scan using FreeStyle LibreLink mobile app or handheld reader, will enable users to view their glucose reading, trend arrow (which indicate rates of glucose change and can be described as the anticipated glucose change) and eight-hour history. Users can also share data with their healthcare providers or family members via LibreLinkUp. This will aid users to keep a better track of their glucose levels and prevent fluctuations, thereby reducing diabetes-related hospital admissions rates. All these features are expected to improve the overall health of the patients and quality of life. Notably, all the services can be availed at the same price as the current FreeStyle Libre system.

For investors’ note, a real-world study published in the British Medical Journal has demonstrated that with the use of FreeStyle Libre system for over a year, users can often experience an improved quality of life. Further, work absenteeism rate and diabetes-related hospital admissions also decreased significantly.

Per management, the next-generation FreeStyle Libre 2 system aims to provide a better user experience and simplify diabetes management as much as possible.

Per a report by Grand View Research, the global CGM device market size was valued at $3,929.7 million in 2019 and is anticipated to reach $10.4 billion by 2027 at a CAGR of 12.7%. Factors like rising incidence of diabetes and increasing adoption of CGM devices are expected to drive the market.

Given the market potential, the regulatory clearance in Canada is expected to significantly boost Abbott’s business.

Abbott has been witnessing a slew of developments in its business arm over the past few months.

The company, during its third-quarter earnings in October, confirmed that its diabetes care business performed impressively with significant growth in sales.
Abbott, in September, received the CE Mark for its next-generation FreeStyle Libre 3 system which makes the sensory device eligible for use in Europe. The same month, the company launched the world's first glucose sport biosensor, Libre Sense Glucose Sport Biosensor, in Europe. 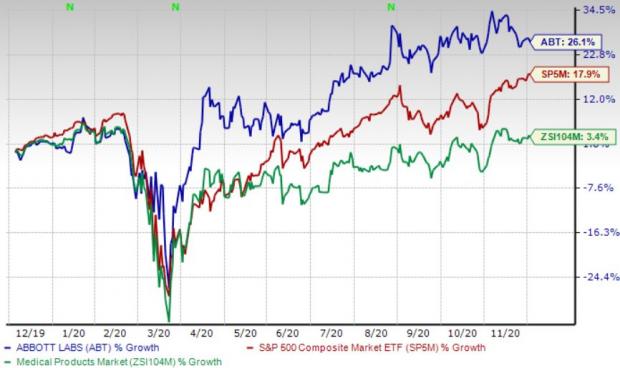