Nissan Motor Co. (NSANY - Free Report) recently announced its decision to withdraw support for the Donald Trump administration in a federal lawsuit over California’s right to establish its own auto-pollution and gas-mileage standards.

Under the Clean Air Act, California being the largest auto market in the United States and the 10th largest in the world, has been allowed to set its own emissions standards, which are tighter than federal guidelines and set the standard for the entire automobile sector in the country.

Last year, automakers had a bifurcation over a plan by the Trump administration to annul gas mileage rules set by President Barack Obama’s administration and revoke California’s permission to set its own fuel efficiency standards on greenhouse gas emissions. Remarkably, 13 automakers including General Motors (GM - Free Report) , Fiat Chrysler and Toyota (TM - Free Report) had advocated President Trump’s efforts to overturn California’s emission rules since he took office in 2017. However, five companies — Ford, Volkswagen AG, Honda, BMW AG and Volvo — had sided with California and entered into a deal with the state that roughly matched the cleaner auto plan set by the Obama-era Environmental Protection Agency.

Recently, General Motors decided to abandon Trump’s effort to roll back California’s ability to set fuel efficiency standards. The automaker is now positioning itself with President-elect Joe Biden’s plans to pace up a transition to electric vehicles amid the heightening climate-change concerns.

Biden has extended his support to the Obama-era rules (and California’s standards) and pledged to bring rapid adoption of zero-emission vehicles.

General Motors had earlier shared plans of launching 30 electric vehicles by 2025 and vowed to increase its investment in the development of electric vehicles. The automaker is convinced that the Biden Administration, California, and the U.S. auto industry can collectively find a way to an all-electric future of the auto industry which will facilitate the company in meeting its long-term target.

The latest withdrawal by Nissan comes in after General Motors’ decision, and is an indication that the alliance of automakers backing the Trump administration's legal battle with California on emissions standards is collapsing.

Nissan withdrew its support as the automaker is certain that the auto industry, along with California and the Biden administration, can reach a consensus on standards that delivers efficiency and meets the needs of all American drivers.

Notably, Nissan — one of the largest automakers in the world — has not made it clear whether or not the company plans on joining  hands with the opposing group of automakers, which have agreed to abide by California’s fuel efficiency standards.

Nonetheless, Nissan has been vocal about its endeavors to fuel growth in the economy by focusing on advancement of technologies while balancing priorities like the environment, safety, affordability and jobs. 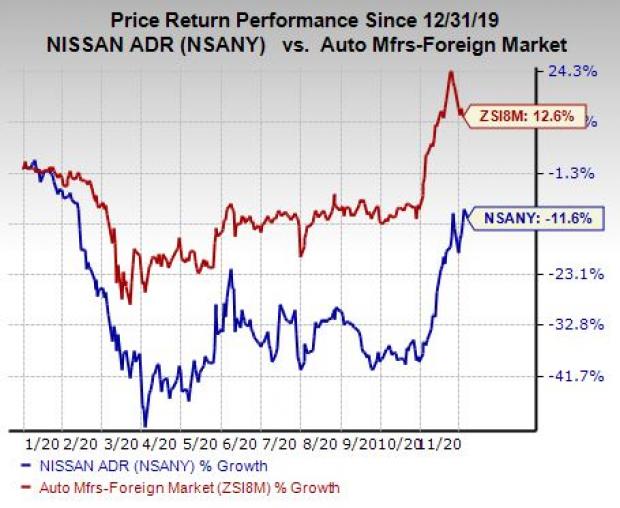