Not Every Retailer is Suffering This Earnings Season

It has been the accepted wisdom for a while that it is only a question of time before Amazon mops up the traditional brick-and-mortar retailer’s every last sales dollar. I am obviously exaggerating here, but we have been seeing the ‘Amazon effect’ in a host of retail sub-industries in recent years.

Many have been thinking that what happened to Barnes & Noble and other booksellers is the fate of most traditional retailers; we certainly have seen the once-mighty operators like Macy’s (M) in the department store space and Wal-Mart (WMT) in the big-box discounter industry humbled in recent years. You can see this in the stock market performance of these players – Amazon shares are up +37.7% in the past year while Macy’s is down -26.7% in that same time period.

Wal-Mart shares have done better – they are up +13% over the past year – largely because market participants have come around lately to see its digital strategy as credible. The retail giant has not only been steadily making investments in its online operations, but also strengthening its legacy through investments in employees and cleaner and more organized floor space. This has started showing up in Wal-Mart’s earnings results, as we saw in the company’s strong Q1 earnings report. But it’s safe to say that Wal-Mart still has a long way to go before it can effectively fend off the Amazon challenge.

One could argue that what has started working for Wal-Mart should work for Macy’s as well. But their brick-and-mortar commonality aside, they are fundamentally different businesses. Wal-Mart may bring in foot traffic through its enormous groceries business, but there is increasingly less reason for consumers to visit Macy’s, other department stores or even the malls. We are seeing this issue with a host of other mall-based retailers as well, which is giving rise to the ‘death of the mall’ narrative. We should be mindful, however, that as weak as the mall-based retail space has been lately, some of these mall-based players have been able to make it work.

Strong results from The Children’s Place (PLCE) and Gap (GPS) prove this point. But for every Children’s Place winner, you have a host of mall-based Foot Locker (FL) losers that are forced to blame everything – from delayed tax refunds and Easter Day placements to the weather – but their inability to respond to changing consumer behavior. On a related note, the Foot Locker disappointment may have read-throughs for Nike (NKE) and Under Armour (UAA - Free Report) as well.

Please note that we have a stand-alone Retail sector, unlike the official Standard & Poor’s placement of this space in the Consumer Discretionary sector. The Zacks Retail sector includes, besides the traditional department stores and other brick-and-mortar retailers, the online vendors like Amazon and restaurant operators.

The side-by-side charts below compare the sector’s results thus far with what we have seen from the same group of 33 retailers in other recent periods.

The aggregate results from the 33 retailers that have reported Q1 results already are tracking below what we had seen from the same companies in other recent periods. This is despite the +41.1% growth in Amazon’s earnings on +22.6% higher revenues. On an ex-Amazon basis, the sector’s Q1 earnings growth would be flat, as the right-hand chart below shows.

A few standout results notwithstanding, the sector’s Q1 results have been notably weak in an otherwise strong earnings season. Please note that the proportion of Retail sector companies beating EPS estimates (63.6%) is the third lowest in the entire S&P 500 index, while the proportion of revenue surprises (54.5%) is the fourth lowest of all 16 Zacks sectors.

As of Friday, May 19th, we have Q1 results from 472 S&P 500 members that combined account for 96.9% of the index’s total market capitalization. Total earnings for these companies are up +13.7% from the same period last year on +7.2% higher revenues, with 72.5% beating EPS estimates and 65.7% beating revenue estimates. The proportion of companies beating both EPS and revenue estimates is 51.7%.

The table provides the current earnings season scorecard, as of May 19th, 2017. 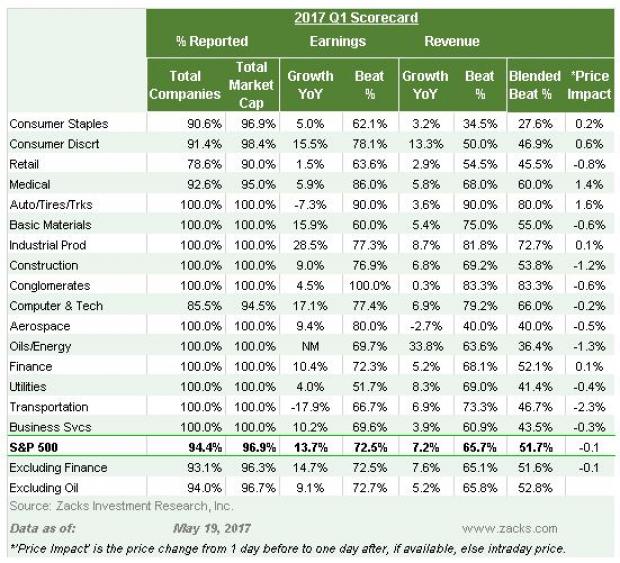 The chart below provides a comparison of the growth performance thus far with what we have seen from this same group of 472 S&P 500 members in other recent periods. 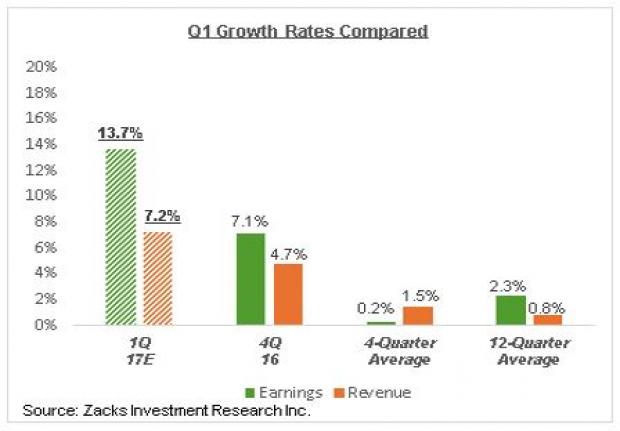 As you can see, the Q1 growth pace is notably tracking above what we had seen from the same group of 472 index members in other recent periods. Importantly, the growth performance is broad-based and not narrowly concentrated. We got the leadership from the Finance space earlier in the reporting cycle, but the baton has since shifted to Tech and host of other areas, including Industrials, Basic Materials, and Energy.

The chart below compares the proportion of positive EPS and revenue surprises in Q1 thus far with what we had seen from the same group of 472 index members in other recent periods. 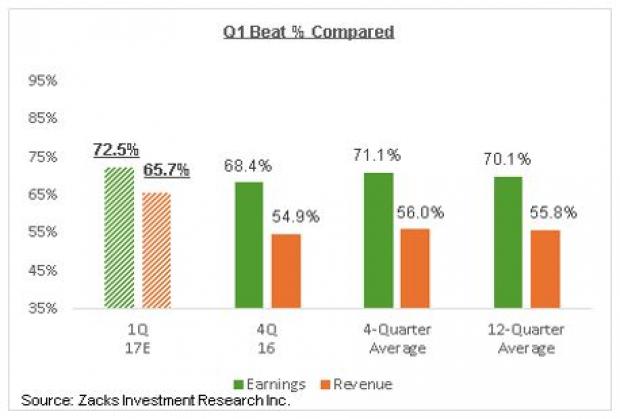 The proportion of Q1 companies beating EPS estimates is tracking above historical periods, with positive revenue surprises particularly coming out ahead of what we are used to seeing in the recent past. You can see the same in the chart below that compares the proportion of Q1 companies beating both EPS and revenue estimates with other recent periods. 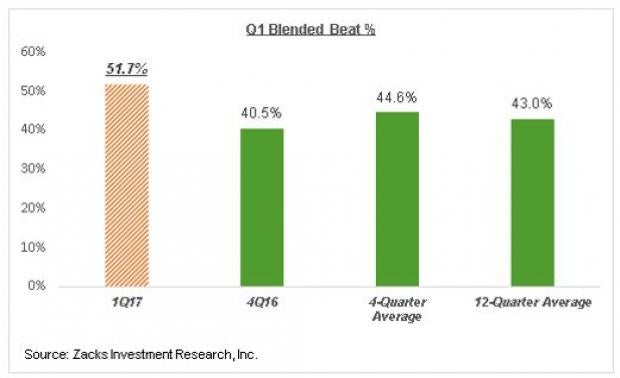 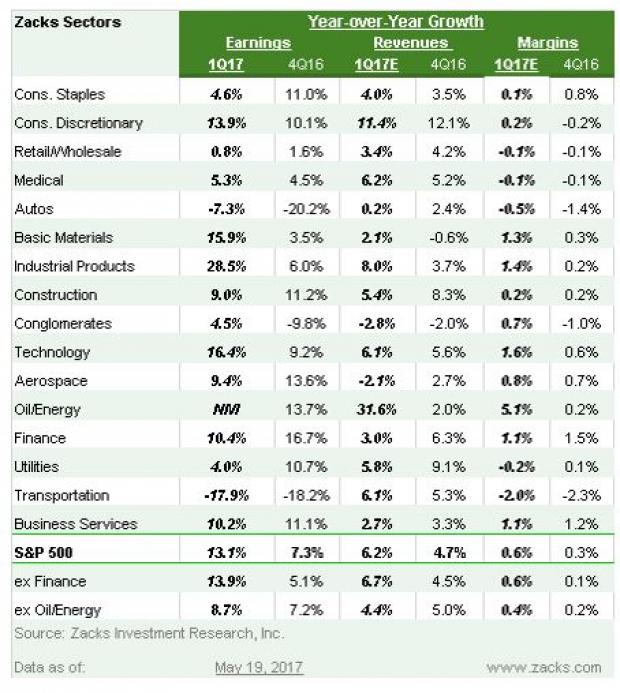 Please note that the Q1 earnings season follows the strong showing on the earnings front in the preceding reporting cycle. Not only did 2016 Q4 growth reach the highest in two years, but total earnings for the quarter also reached a new quarterly record. The strong Q4 performance came after the first positive earnings growth in 2016 Q3, having declined in each of the preceding 5 quarters. The strong Q1 showing represents a notable acceleration in the growth momentum.

The chart below shows the Q1 earnings growth contrasted with what is expected in the following three quarters and actual results in the preceding 5 quarters. As you can see in the chart below, this growth pace is expected to continue through the rest of the year. 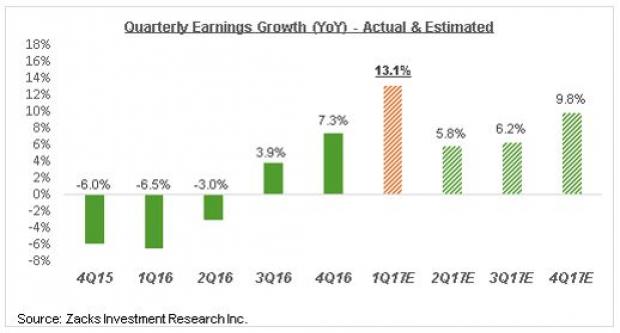 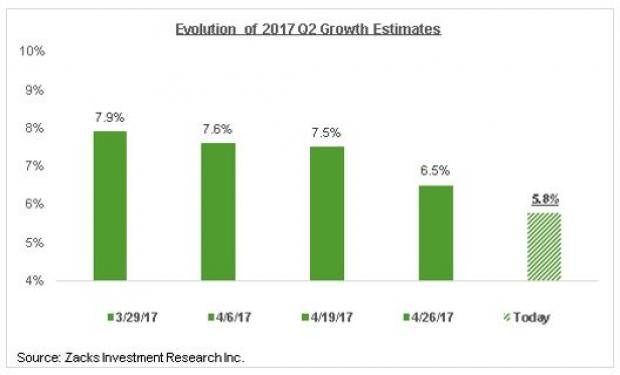 Today, you are invited to download the full, up-to-the-minute list of 220 Zacks Rank #1 "Strong Buy" stocks – absolutely free of charge. Since 1988, Zacks Rank #1 stocks have nearly tripled the market, with average gains of +26% per year. Plus, you can access the list of portfolio-killing Zacks Rank #5 "Strong Sells" and other private research. See these stocks free >>

Here is a list of the 111 companies including 18 S&P 500 members reporting this week.

Not Every Retailer is Suffering This Earnings Season