In the past week, American Airlines (AAL - Free Report) provided a grim outlook for the December quarter’s cash burn per day. It is not the only carrier to have provided a bleak fourth-quarter update as air-travel demand slowed down in the wake of the recent surge in coronavirus cases across the United States. Notably, Spirit Airlines (SAVE - Free Report) expects ticket revenue per passenger flight segment to remain suppressed in the December quarter due to tepid demand. Moreover, JetBlue Airways (JBLU - Free Report) too issued a downbeat outlook for the final quarter of 2020 as was reported in the previous week’s write up.

Further, Southwest Airlines (LUV - Free Report) grabbed headlines by virtue of its warning to more than 6,000 employees that they might face retrenchment next year. Meanwhile, Gol Linhas (GOL - Free Report) reported a 43.8% plunge in November traffic. Capacity also declined 46.3% in the month. Notably, this Latin-American carrier became the first airline company in the world to resume Boeing 737 Max passenger flight services. Gol started operating the jets commercially in its domestic network on Dec 9, 2020.

Synopsis of the Past Week’s Top Stories

1.     American Airlines’ management stated in a SEC filing that it got off to a “strong start” in the fourth quarter of 2020 but “rising COVID-19 case counts and associated travel restrictions in the immediate period leading up to the Thanksgiving holiday have resulted in a slowing of net bookings growth, which has persisted into December”. Due to this shrinking demand as well as modestly higher fuel prices, the Fort Worth, TX-based company anticipates fourth-quarter average cash burn at the high end of its guided range of $25-$30 million per day.

2.  Spirit Airlines, currently carrying a Zacks Rank #3 (Hold), expects fourth-quarter 2020 non-ticket revenues per passenger flight segment to decrease slightly from $58.03 registered a year ago. Load factor (% of passengers occupying seats) is expected to average at roughly 70% in fourth-quarter 2020. The carrier had recorded load factor of 84.8% in fourth-quarter 2019. For the final quarter of this year, the company still expects average daily cash burn to be about $2 million per day. Fuel price per gallon is anticipated to be $1.31, up 8 cents from the initial expectation of $1.23.

3. Gol Linhas’ gross sales in November were R$886 million, up 6% month over month. However, gross revenues dropped 7% to R$559 million in the same month from October-levels. Average load factor (% of seats filled with passengers) was 84.5% last month, up 6.5 percentage points from the previous month’s readings. The company saw 5% improvement in demand during November from the October tally. The uptick in air-travel demand led the carrier to operate 450 flights daily in November on peak days. Anticipating the increase in travel demand to continue, Gol Linhas further boosted its December capacity by operating nearly 480 flights a day and 600 flights daily on the peak days.

4. Per a CNN Report, Southwest Airlines warned of involuntary furloughs for the first time in its history. Given that the company’s cost-cutting negotiations with its unions reached deadlock, management issued a statement with the caution that jobs of nearly 7,000 employees across various workgroups (roughly 12% of its work force) will be in jeopardy. Notably, the airline sent out notices to these employees who are at high risk of losing their jobs. The layoff might start Mar 15, 2021 onward.

5.  Delta Air Lines (DAL - Free Report) permanently scrapped change fees for international travel originating from North America with immediate effect. The move is aimed at attracting customers amid the coronavirus-induced suppressed demand scenario. Additionally, the airline is waiving change fees for all domestic and international tickets purchased through Mar 30, 2021 to make it easier for customers to change travel plans during the holiday season.

The following table shows the price movement of major airline players over     the past week and during the past six months. 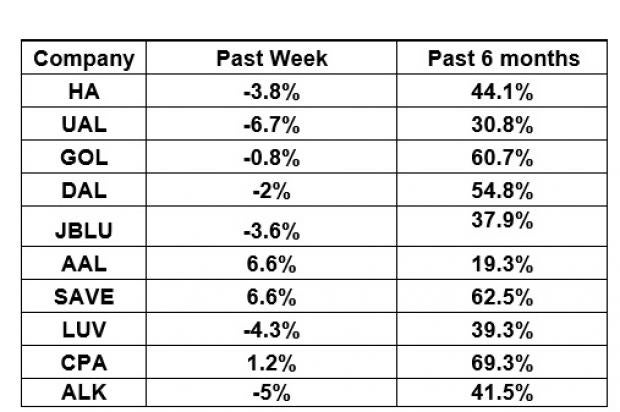 The prospects of another federal stimulus package look brighter following president-elect Joe Biden’s statements in its favor.  Investors   will look forward to updates on the same.