Bell-Boeing, a joint venture (JV) between The Boeing Company (BA - Free Report) and Bell Helicopter — a unit of Textron Inc. (TXT - Free Report) — recently secured a modification contract involving the V-22 aircraft program.  Work related to the deal is scheduled to be completed by September 2024.

Valued at $170.4 million, the contract was awarded by the Naval Air Systems Command, Patuxent River, MD. Per the terms, the JV will conduct the production and delivery of one CMV-22B variation in quantity aircraft for the U.S. Navy and exercise options for V-22 Common Configuration Readiness and Modernization (CC-RAM) Lot 4 requirements.

Majority of the task will be executed in Ridley Park, PA.

Notably, Bell-Boeing’s primary product, V-22 Osprey is a family of multi-mission, tiltrotor military aircraft with both vertical as well as short takeoff and landing capabilities. It is designed to combine the functionality of a conventional helicopter with long-range, high-speed cruise performance of a turboprop aircraft. Notably, the CMV-22B is a variant of the V-22 family of jets and fulfills the Joint Force Maritime Component Commander (JFMCC) time-critical logistics air connector requirements by transporting personnel, mail and priority cargo from advance bases to the seabase.

Apart from its wide usage domestically, this family of tiltrotors has been deployed in numerous missions overseas including casualty evacuation, tactical recovery of aircraft and personnel, humanitarian assistance/disaster relief, resupply, and VIP transport along with theater security cooperation. No doubt with growing demand for military aircraft these tiltrotors enjoy a decent demand pool across the globe. The latest deal win is a bright example of that.

Per a forecast made by Research and Markets firm, the global military aircraft market size is projected to register CAGR of above 2.5% during the 2020-2025 period. This surely is going to benefit major U.S. combat aircraft manufacturers like Bell-Boeing, Lockheed (LMT - Free Report) and Northrop Grumman (NOC - Free Report) , with North America dominating this market space. 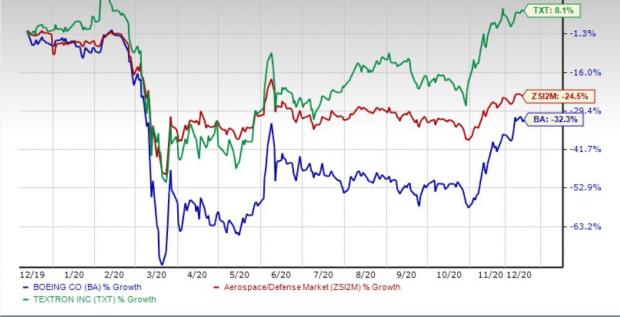