Shares of leading chipmaker Qualcomm Incorporated (QCOM - Free Report) were down 7.4% to close the trading session at $144.28 as on Dec 11 on the news that Apple Inc. (AAPL - Free Report) is developing its own modem for its future devices. This marked one of the sharpest declines for the chipmaker in the recent history. According to industry grapevines, Apple is mulling to replace Qualcomm modems in the long run, likely eliminating third-party dependency with in-house products. 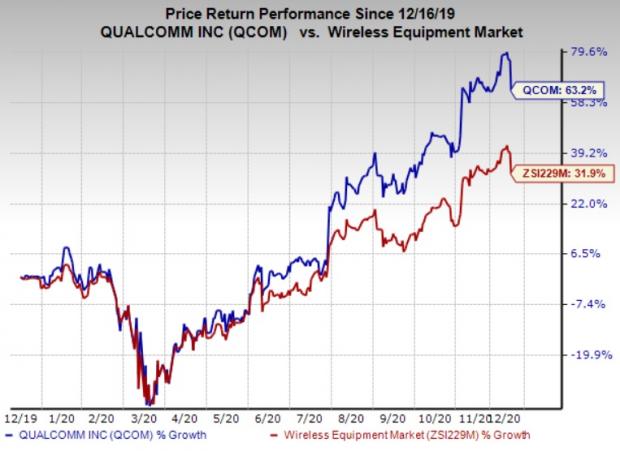 A modem functions as an integral part of smartphones and laptops, enabling seamless Internet connectivity within the devices. Qualcomm modems have been a key feature in the latest iPhone models, connecting the device to cellular networks for fast web browsing and instant app access. Built on indigenous technology that requires specialized engineering expertise and broad industry know-how, these modems have been the hallmark of impeccable performance standards.

Notably, Apple acquired Intel Corporation’s (INTC - Free Report) modem business in 2019 to gain a foothold in this highly technical domain. This helped the iPhone manufacturer to gradually develop a core team of skilled technicians to sow the seeds of its own cellular modems. The company has reportedly revealed that it has started the development of such products to push the frontiers to the next level. Although Apple is yet to divulge the timeframe by which its products will be ready for consumption, the buzz has dealt a blow to future revenue-generating opportunities for Qualcomm.

The news has also raised a question about an earlier patent truce agreement between the two parties. Drawing curtains to prolonged patent litigations, the former allies turned antagonists decided to call a truce in April 2019, with Apple paying an undisclosed amount to Qualcomm. The agreement also included a six-year license agreement effective Apr 1, 2019 along with a two-year extension option and a multi-year chipset supply agreement. Apple was expected to license the chips directly from Qualcomm instead of relying on OEMs to do it on its behalf, likely involving recurring payments to the mobile chip manufacturer. It remains to be seen what lies in store in the future and whether Apple honors this agreement with the availability of its own modem.

Meanwhile, Qualcomm is dealing with its own set of problems. Shift in the share among OEMs at the premium tier has reduced Qualcomm's near-term opportunity to sell integrated chipsets from the Snapdragon platform. The company is facing severe competitive threat from its closest rival Intel, which has been redesigning its chipsets for the mobile computing market. Moreover, Qualcomm has been facing challenges from low-cost chip manufacturers like MediaTek and Rockchip as well as handset manufacturers' SoC projects such as Exynos by Samsung. Although the global smartphone market is expected to maintain its momentum over the next three to four years, major portion of this growth is likely to come from the low-cost emerging markets, which may weigh on Qualcomm's margins. In addition, adverse court rulings relating to its licensing business could impair its growth potential to some extent.

Over the past years, Qualcomm's margins have declined due to high operating expenses and R&D costs. The company expects softness in the handset market and weaker overall mix of devices to remain in the near future. In addition, Qualcomm faces huge concentration risks as bulk of its revenues is generated from a handful of customers — a trend that is expected to continue in the ensuing quarters. It is also expected to face softness in demand from China. Chinese OEMs are pulling back on new 4G device orders and managing their inventory in advance for the transition to 5G. Consequently, Qualcomm expects a significant impact on device shipment as sell-in and sell-through growth rates realign and channel inventory levels are drawn down in China. Global 3G, 4G, 5G device shipments are expected to be affected by lengthening of handset replacement rates due to adverse economic impact from the coronavirus pandemic, likely impacting unit volumes. For calendar 2020, Qualcomm expects a 5% reduction in handset shipments compared to the prior year.

Nevertheless, we remain impressed with the inherent growth potential of this Zacks Rank #3 (Hold) stock. A better-ranked stock in the industry is Clearfield, Inc. (CLFD - Free Report) , carrying a Zacks Rank #2 (Buy). You can see the complete list of today’s Zacks #1 Rank (Strong Buy) stocks here.

3 Water Supply Stocks That Will Continue to Thrive in 2021