The company in its 2021 capital guidance mentioned that it will continue the next phase of its Peace Pipeline expansion and the Empress Co-generation facility in Calgary, Alberta. In March, the projects were postponed as the coronavirus crisis caused economic slowdowns that undermined the entire energy sector with low crude prices and decreased demand.

The Phase VII Peace pipeline expansion involves a new pipeline system and related facilities in the LaGlace-Valleyview-Fox Creek corridor in Alberta to address the increasing customer demand. Notably, the company reduced its capital cost estimate by C$175 million to C$775 million, thereby, curtailing the pipeline’s initial capacity from 240,000 to 160,000 barrels per day.

Beside this, the Empress Co-generation facility, which is expected to cost C$120 million, will use natural gas to produce up to 45 megawatts (“MW”) of electrical power and re-use the generated heat in its regular operations. The output is expected to supply more than 90% of the facility’s requirements and utilize the extracted fuel from the plant’s processing function. Notably, the project is likely to reduce carbon dioxide emissions by 88,000 tonnes per year from the propane-to-plastics facility.

On its part, the projects offer more growth opportunities for Pembina Pipeline’s market presence across the entire value chain since prices have recovered from the all-time low hit earlier this year amid the pandemic, urging producers to restart their shut-in activities and increase capital expenditure.

Further, Pembina Pipeline announced the discontinuation of its C$4.9-billion joint venture project — Canada Kuwait Petrochemical Ltd Partnership — with Petrochemical Industries Company K.S.C on the combined propane dehydration plant and polypropylene upgrading facility. The action was mainly due to the significant risks, mostly related to project costs, arising from the pandemic. The company added that it will take a material impairment on its investment in the joint venture project in the Alberta province, where it owns a 50% stake, in the fourth quarter.

Headquartered in Calgary, Canada, Pembina Pipeline is an energy transportation and service provider. Its shares have underperformed the industry in the past three months. The company’s stock has gained 11.2% compared with the industry’s 12.7% growth. 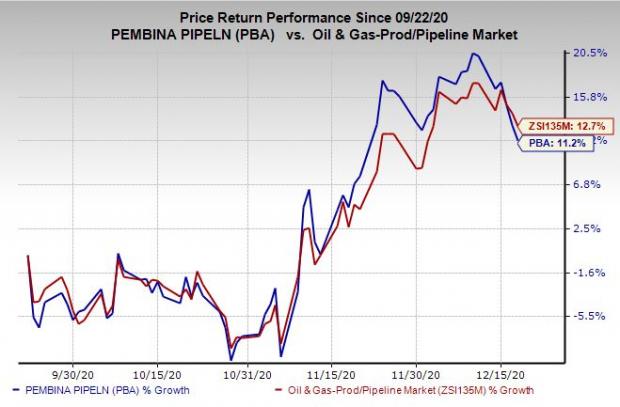 Canadian Natural Resources is expected to see earnings growth of 560.7% in 2021.

3 Lithium Stocks to Power Your Portfolio in 2021