Lockheed Martin (LMT) to Acquire Aerojet Rocketdyne for $5B

Lockheed Martin Corp. (LMT - Free Report) has entered into an agreement to acquire Aerojet Rocketdyne Holdings (AJRD - Free Report) , a rocket engine manufacturer in the United States, for $56 per share in cash. This could later be adjusted to $51 per share after the payment of a special pre-closing dividend of $5. Aerojet Rocketdyne also announced that the payout represents an approximately 33% premium to Friday's closing price.

Lockheed Martin also revealed the total transaction value to be around $5 billion, including debt and net cash. The transaction, subjected to regulatory approvals and approval by Aerojet Rocketdyne's stockholders, is expected to close in the second half of 2021.

The integration of Aerojet Rocketdyne into Lockheed Martin's portfolio will undoubtedly benefit the latter in enhancing its support of critical U.S. and allied security missions, thereof retaining national leadership in space and hypersonic technology. Aerojet Rocketdyne's inclusion will also be instrumental in strengthening the domestic defense industrial base and reducing the costs of a varied range of its products.

Furthermore, the acquisition will enable Lockheed Martin to extend its footprint in the rocket engine market, as it will thrive on Aerojet Rocketdyne's existing customer relationships, primary operation sites across the United States and the significant demand for its innovative technologies. Moreover, Aerojet Rocketdyne's inclusion within Lockheed Martin will add substantial expertise to the latter’s portfolio, by integrating critical components of the supply chain and several advanced systems across its major business areas.

Interestingly, toward the end of November, Lockheed Martin closed its acquisition of the Hypersonics portfolio of Integration Innovation Inc., also known as i3. The acquisition will expand the company’s capabilities to design, develop and produce integrated hypersonic weapon systems for its customers.

Alongside the recent acquisition agreement made by Lockheed Martin, this year has witnessed quite a few major mergers and acquisitions within the U.S. defense space, irrespective of the global volatile market conditions caused by impacts of the COVID-19 pandemic. Let’s have a look at a few of such acquisitions that took place this year.

In a year’s time, shares of Lockheed Martin have lost 9.2% compared with the industry’s 26.5% decline. 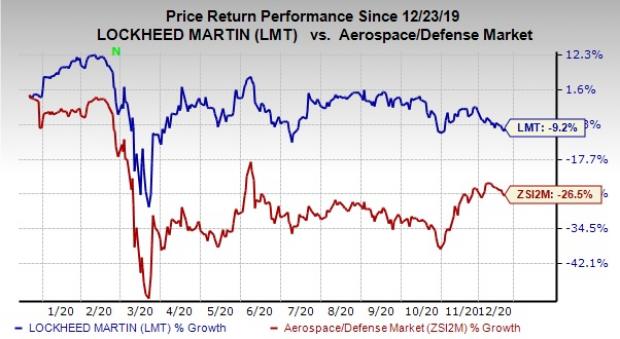