Motorola Solutions, Inc. (MSI - Free Report) recently announced that it has joined forces with a leading telecommunications company — Telstra Corporation Limited (TLSYY - Free Report) — to revamp the mission-critical communications infrastructure for emergency responders in Tasmania. As part of the multi-year agreement, the Tasmanian government will capitalize on Motorola’s broadband push-to-talk (PTT) services and Telstra’s expertise on radio systems for an enhanced public safety network across the Australian state.

Telstra continues to reinforce its 5G capabilities to accelerate deployments while expanding its reach to nearly 75% of the population by the end of June 2021, on the virtue of Australia’s largest 5G network. Impressively, the company is also known for its pivotal role in mission critical communications. Its cost-effective managed radio solution is ideal for emergency service functions and large infrastructure projects. It not only minimizes capital investments but also streamlines day-to-day operations with utmost security, even in harsh environments.

Apart from Telstra’s radio expertise, Motorola’s broadband PTT services will be leveraged to design, operate and maintain Tasmania’s Government Radio Network (TasGRN) as part of the alliance. The PTT solution extends two-way radio to broadband communication and maximizes coverage with seamless connectivity. With more than 500 broadband PTT deployments globally, it offers interoperable communications to collaborate, irrespective of the network.

The advanced radio network will help TasGRN to upgrade its critical technology amid dynamic security landscape on the back of managed services. Notably, TasGRN is believed to be Telstra’s largest project in Tasmania. With the recent partnership, Motorola aims to strengthen its position in the public safety domain by entering into alliances with other players in the ecosystem.

Motorola has a long-term earnings growth expectation of 9%. The Zacks Rank #3 (Hold) stock has gained 10.4% compared with the industry’s growth of 23.2% in the past three months. 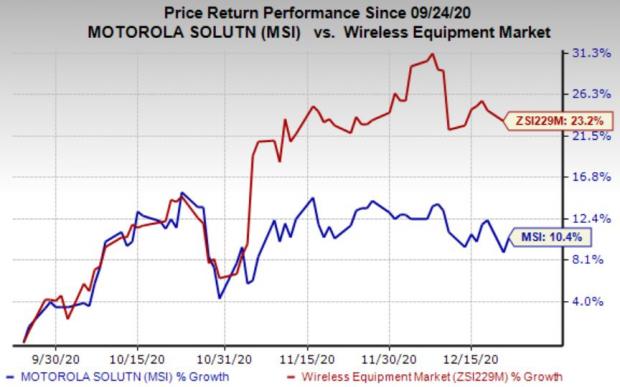 Aviat Networks pulled off a trailing four-quarter positive earnings surprise of 11.8%, on average.

Ubiquiti pulled off a trailing four-quarter positive earnings surprise of 27.9%, on average.