Marriott International, Inc. (MAR - Free Report) recently expanded its footprint in Japan by introducing six of its hotel brands, AC Hotels by Marriott, Aloft Hotels, EDITION, JW Marriott, Fairfield by Marriott and Ritz-Carlton Reserve in 2020. The company will end 2020 with 63 open properties in Japan across 18 brands. This endeavor is in sync with the company’s aggressive expansion strategy.

Rajeev Menon, president, Marriott International Asia-Pacific (excluding Greater China) said “With its beautiful contrasts between modernity and traditions, future-forward cities and breathtaking rural landscapes, Japan has always been an important market to Marriott International as a preferred destination for travelers.”

The company announced it has more than 30 hotels in the development pipeline in Japan, expected to open doors in the days ahead. The development includes the much-anticipated debut of The Bulgari Tokyo and additional Fairfield by Marriott Michi-no-eki hotels across Japan.

In the past six months, shares of Marriott have gained 48.5% compared with the industry’s rally of 39.5%. 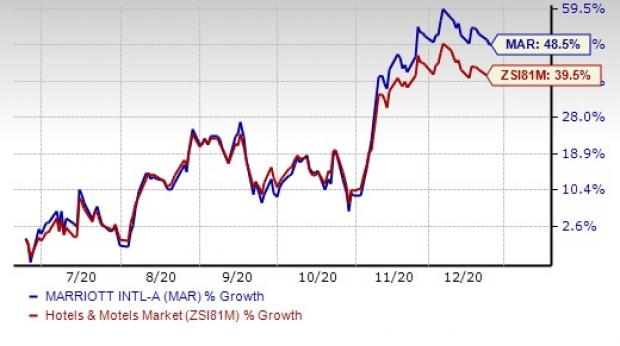 Marriott is consistently trying to expand presence worldwide and capitalize on demand for hotels in international markets. The hotel company is also trying to strengthen presence outside the United States, especially in Asia, Latin America, Middle East and Africa. Notably, demand for hotels in these markets is greater than in the domestic space as the rising disposable income, primarily among the middle classes, is boosting tourism.

At the end of second-quarter 2020, Marriott's development pipeline had nearly 3,000 hotels, with approximately 510,000 rooms. Further, nearly 230,000 rooms were under construction.