CVR Energy, Inc. (CVI - Free Report) obtained final approval from its board of directors to proceed with the Phase 1 of its renewable diesel project worth $110 million in Wynnewood, OK.

The project involves the conversion of the facility’s hydrocracker unit for the production of renewable diesel. Investors should know that the company has already commenced several construction activities, including detailed engineering design work as part of the project and ordered long lead-time equipment. Importantly, CVR Energy plans for the facility to become operational by July 1, 2021.

The Wynnewood unit is expected to produce about 100 million gallons of renewable diesel and more than 6 million gallons of renewable naphtha per year, which would generate 170 million to 180 million of the company’s annual Renewable Identification Number (“RIN”) — a 38-character tracking numbers or tradable certificates assigned to each physical gallon of renewable fuel produced. CVR Energy claimed that it is seeking renewable diesel production in order to reduce its RIN exposure under the Renewable Fuel Standard (or RFS) of the Clean Air Act.

At this stage, the company evaluates total capital costs of $110 million for the project or $1.1 per gallon of renewable diesel capacity. Importantly, the majority of expenses shall be recovered by the end of 2022 through the generation of RINs along with Blender’s Tax and Low Carbon Fuel Standard credits.

Following the completion, the project is expected to further strengthen the company’s goal to limit its dependency on RIN purchases to act in accordance with the RFS program. It requires, among other provisions, the mixing of renewable fuels (like corn ethanol or other biofuels) into gasoline and diesel.

Notably, the project marks the beginning of a multi-phased approach to the company’s renewable diesel strategy and aims to reduce its total net RIN purchases to below 80 million annually, once the facility becomes functional.

Its shares have underperformed the industry in the past three months. Its stock has gained 18.3% compared with the industry’s 30% rally. 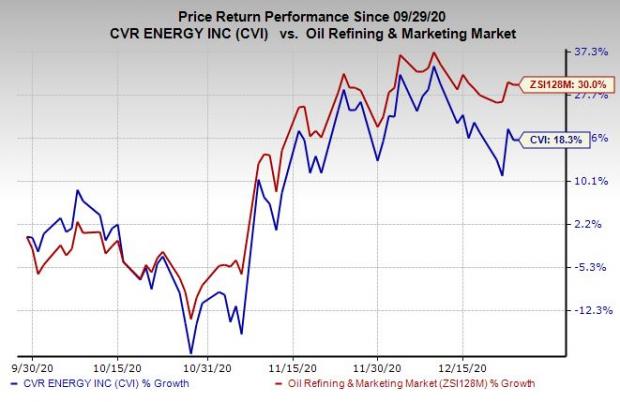 In the past 60 days, the Zacks Consensus Estimate for Delek Logistics’ 2020 earnings has been raised 11.3%.

Canadian Natural Resources and Enerplus Corporation are likely to see earnings growth of 560.7% and 437.5%, respectively, in the next year.