Ameren Corporation (AEE - Free Report) recently announced that its unit Ameren Missouri has acquired a 400-megawatt (MW) High Prairie Renewable Energy Center wind project in northeast Missouri. This is part of the company’s planned inorganic route investment, which will add 700 MW of clean energy to the existing portfolio. It will acquire a 300-MW energy center in Atchison County, MO and then complete the $1.2-billion acquisition investment.

In addition to making acquisitions and setting up new clean energy-based power projects, it is also shutting down coal-fired electricity generating units. Ameren aims to retire 75% of coal-based generation units by 2039 and retire all coal-based units by 2042.

Ameren will evaluate and pursue other clean energy options without compromising on delivering 24/7 electricity to customers in an affordable manner.

Utility operators in the United States have decided to invest in projects that are emission less or produce a very minimum emission to produce electricity. Countries across the globe are working on finding ways to lower expenses for developing utility scale renewable power projects, and finding new techniques as well as processes to make clean energy affordable for users.

In the past six months, the company has returned 11.5% compared with the industry’s rally of 7.8%. 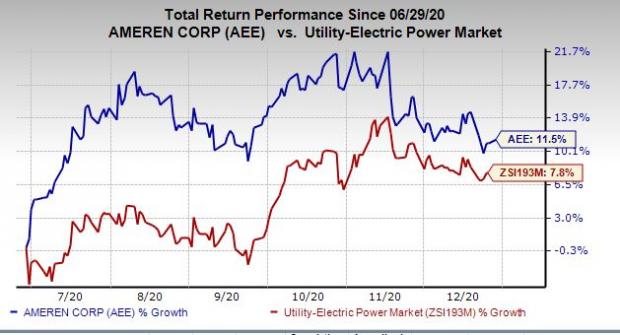