The partnership is primarily aimed at helping companies develop latency-sensitive applications for the modernization of various industries ranging from transportation to healthcare. Markedly, AWS Wavelength and Verizon’s 5G network are the integral components of the deployment drive. The partnership underscores Verizon’s commitment to effectively install 5G Edge and MEC technology on the back of its Ultra Wideband network in 2020 for an enhanced customer experience.

Markedly, AWS Wavelength is an infrastructure offering that has been optimized for mobile edge computing applications. Wavelength zones are infrastructure deployments that embed AWS compute and storage services within communications service providers’ data centers. This reduces the round-trip that data requires to travel and enhances response times, thereby enabling customers to take full advantage of the latency and bandwidth benefits offered by 5G networks.

As workloads and industrial applications are gradually migrating toward the edge of the network, advanced technologies like Internet of Things (IoT), Augmented Reality/Virtual Reality, autonomous vehicles seem to be the call of the hour, and Verizon’s 5G and MEC technology serves the purpose with utmost ease. These modern-age technologies are better known for enhancing the enterprise connectivity infrastructure.

Verizon’s 5G Edge is a MEC platform that has been specifically designed to enable developers to build applications for wireless edge devices and mobile users and with massive throughput and ultra-low latency. 5G Edge moves the data and processing done by the applications and services closer to the end user at the edge of the network. AWS Wavelength brings compute and storage services to the edge of Verizon’s 5G Ultra Wideband network.

The companies had previously deployed the MEC platform in Boston and the San Francisco Bay Area in August. Since then, it has been launched in Dallas, Atlanta, Miami, Las Vegas, New York and Washington, DC. Impressively, Verizon 5G Edge and AWS Wavelength platforms have been adopted by tech companies like Skyward, HARMAN and Inception XR to test the feasibility of MEC and 5G in drones, cellular vehicle-to-everything computing and immersive content, respectively.

Notably, Verizon first announced achievements toward its virtualization efforts in early 2019 when it introduced cloud-native technology. The virtualization of the entire network from the core to the edge has been a multi-year redesign effort of Verizon’s network architecture. The New York-based telecom giant has been building its 5G Ultra Wideband network to enable 5G innovations that will support the changing behavior of businesses and consumers. It is worth mentioning that the company’s 5G Nationwide covers more than 200 million people in above 1,800 cities.

As one of the most efficient wireless networks in the United States, Verizon deploys state-of-the-art technologies to solve complex business challenges and deliver increased capacity, lower latency and faster speeds. Seeking competitive edge in a saturated and price-sensitive market, the company aims to retain its lead in promulgating 5G mobile networks nationwide by using virtualized machines and advanced levels of operational automation.

In the enterprise and wholesale businesses, Verizon is shifting its revenue mix toward newer growth services like cloud, security and professional services. Also, the company is looking forward to leverage innovative technology solutions being developed in the IoT and the telematics ecosystem across multiple industries. Further, the company’s focus on online content delivery, mobile video and online advertising is likely to stoke growth.

Verizon currently has a Zacks Rank #3 (Hold). Despite such diligent operational strategies, the stock has lost 4.3% compared with the industry’s decline of 2.3% in the past year. 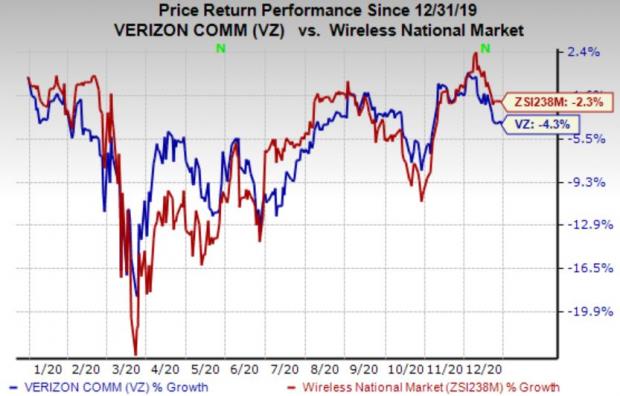 U.S. Cellular pulled off a trailing four-quarter positive earnings surprise of 231.1%, on average.

Gogo pulled off a trailing four-quarter positive earnings surprise of 23.9%, on average.