In order to boost its market presence, T-Mobile US, Inc. (TMUS - Free Report) recently inked a definitive agreement to acquire the Sprint-branded wireless assets of Brookings Municipal Utilities (“BMU”) in Brookings, SD, for an undisclosed amount. The acquisition, subject to mandatory closing conditions and regulatory approvals, is likely to close in the first quarter of 2021.

Per the deal, T-Mobile will gain BMU’s wireless network, retail stores and PCS (Personal Communications Services) spectrum in the 1850 – 1990 MHz band that served approximately 14,000 customers in Sioux Falls, Watertown, and Brookings, SD and Sioux City, IA. Notably, Sprint was the pioneer of PCS spectrum in the United States and was used for the initial deployment of LTE technology. The buyout will expand T-Mobile’s retail distribution network in the region while extending its network coverage and subscriber base.

With the merger and subsequent integration with Sprint assets, T-Mobile has redefined itself as a wireless behemoth with a huge subscriber base compared with rivals like AT&T Inc. (T - Free Report) and Verizon Communications Inc. (VZ - Free Report) . The merger has enabled T-Mobile and Sprint to join their high- and low-band spectrum for a faster nationwide 5G rollout, undeniably disrupting the competitive landscape of the U.S. telecom market.

In addition, T-Mobile has gained the wherewithal to offer unmatched value to consumers, with better service at lower prices. The enhanced scale and financial strength of the combined entity will drive a planned investment of $40 billion in its network and business over the next three years. Moreover, synergies achieved from the integration have the potential to unlock massive scale and deliver greater value to stockholders.

T-Mobile’s network will likely have 14 times more capacity in the next six years than on a standalone basis, which will enable it to leapfrog the competition in network capability and experience. Its customers will have access to average 5G speed, which will be up to eight times faster than current LTE in a few years and 15 times faster over the next six years. T-Mobile is expected to provide 5G to 99% of the U.S. population and average 5G speeds above 100 Mbps to 90% of the population. T-Mobile’s business plan is built on covering 90% of rural Americans with average 5G speeds of 50 Mbps, up to two times faster than broadband. It will compete for consumers at all price points. The acquisition of the latest Sprint-branded assets from BMU will likely aid the company in this endeavor.

The stock has gained 68.4% in the past year against 0.7% decline for the industry. 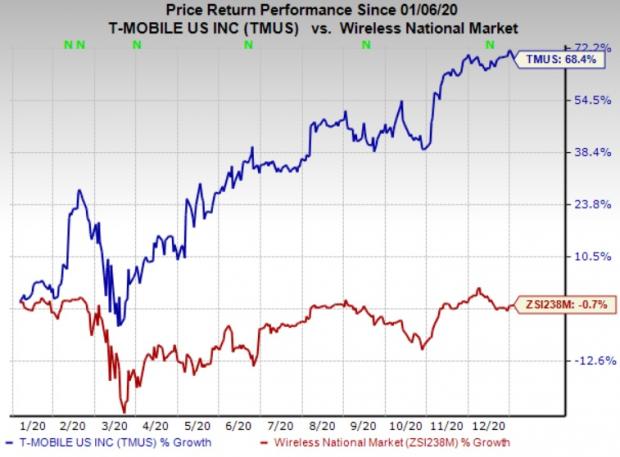 T-Mobile currently has a Zacks Rank #2 (Buy). You can see the complete list of today’s Zacks Rank #1(Strong Buy)stocks here.

Another top-ranked stock in the industry is Gogo Inc. (GOGO - Free Report) , carrying a Zacks Rank #2.

Gogo delivered a positive earnings surprise of 23.9%, on average, in the trailing four quarters.

6 Reasons Why You Should Invest in Republic Services (RSG)