Per the terms of the deal, the company will assemble, integrate and test the three NGG Earth-orbiting SVs before delivering them to the Los Angeles Air Force Base. Additionally, Lockheed Martin’s Space systems will deliver ground mission unique software and ground sensor processing software.

The company will also provide engineering support services for launch vehicle integration and launch and early on-orbit checkout for all three NGG SVs. Work related to the deal will be performed in Sunnyvale, CA, and is expected to get completed by May 31, 2028.

Role of Spacecraft in Surveillance

In recent times, armed forces across the globe have been significantly relying on space-based capabilities in the areas of missile warning and missile defense. Additionally, space-based assets are also being increasingly used for reconnaissance, weather tracking, communication and navigation, and more.

Lockheed Martin’s Next-gen Geosynchronous spacecraft have more powerful sensors and other features that make them more resilient against attacks and emerging threats than current satellites. Such features will likely help the company capture more shares in the expanding spacecraft market, going ahead.

In recent times, rising global tensions have enticed developing nations like the United States to further strengthen its military prowess within the space domain. This is evident from the U.S. government’s fiscal 2021 defense budget that includes a significant spending plan of $18 billion on the space domain. Such a stupendous budgetary amendment reflects massive growth prospects for Lockheed Martin and other defense players engaged in space science such as The Boeing Company (BA - Free Report) , Northrop Grumman (NOC - Free Report) and Raytheon Technologies (RTX - Free Report) , in the days ahead.

Shares of this Zacks Rank #3 (Hold) company have only lost 16.6% in the past year compared with the industry’s decline of 26.3%. You can see the complete list of today’s Zacks #1 Rank (Strong Buy) stocks here. 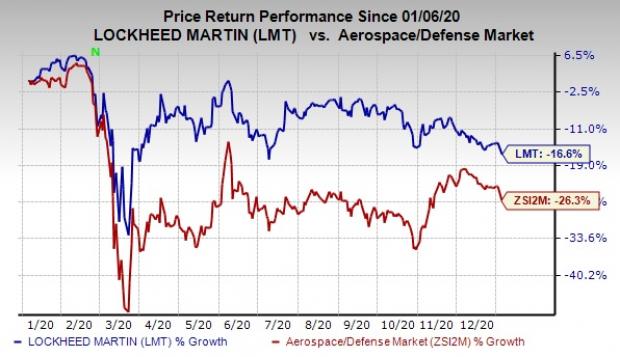