Medtronic plc (MDT - Free Report) has been gaining on a slew of product launches and regulatory approvals. Faster-than-expected recovery in the second quarter of fiscal 2021 and improvement in geographical performances buoy optimism as well. However, foreign exchange fluctuations and a stiff competitive landscape are major downsides.

The renowned medical technology, services and solutions provider has a market capitalization of $156.17 billion. The company projects 7.3% growth for the next five years and expects to witness continued improvements in its business. The company surpassed the Zacks Consensus Estimates in three of the trailing four quarters and missed the same in one, the average surprise being 57.17%. 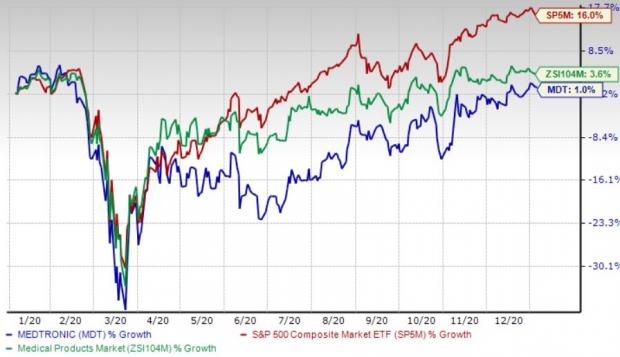 Product Launches: We are upbeat about the slew of product launches by Medtronic over the past few months. The company, in December 2020, announced the U.S. commercial launch of the Carpediem Cardio-Renal Pediatric Dialysis Emergency Machine following the FDA’s marketing authorization granted earlier in the year. Medtronic announced the launch of InPen integrated with real-time Guardian Connect continuous glucose monitoring data in November 2020.

The company announced the U.S. launch of Adaptix Interbody System in October post its FDA approval in August. Notably, Adaptix is the first navigated titanium implant with Titan nanoLOCK Surface Technology, a proprietary combination of surface textures on the macro, micro and nano levels.

Regulatory Approvals: We are optimistic about the slew of regulatory approvals received by Medtronic. The company received the FDA’s approval for the use of navigated interbody and Midas Rex high speed drills with the Mazor Robotic Guidance System in December 2020. The same month, Medtronic’s Micra AV received regulatory go ahead in Canada following the receipt of the U.S. and European approvals earlier in the year.

The company, in October 2020, received the FDA’s 510(k) clearance for the NIM Vital nerve monitoring system, thus enabling physicians to identify, confirm and monitor nerve function to help reduce the risk of nerve damage during head and neck surgery. The same month, Medtronic received the FDA’s approval for the Abre venous self-expanding stent system, which is indicated for use in iliofemoral veins in patients with symptomatic iliofemoral venous outflow (deep venous) obstruction.

Strong Q2 Results: Medtronic’s better-than-expected results in second-quarter fiscal 2021 buoy optimism. The company reported sequential improvement in all of its businesses and geographies, leading to faster-than-expected recovery. Despite the rising number of COVID-19 cases in many of the company’s markets, October was better than September in all of its groups and regions, except for China, given the impact of the national tender in drug-eluting stents.

In fiscal second quarter, recovery within Minimally Invasive Therapies Group was the fastest, with strong growth in both Surgical Innovations (“SI”) and Respiratory, Gastrointestinal and Renal. SI benefited from increased elective procedure volumes in Europe and the United States driven in part by elective procedures that were delayed from spring and early summer.

Medtronic has been witnessing an upward estimate revision trend for 2021. Over the past 90 days, the Zacks Consensus Estimate for its earnings has moved 6.6% north to $4.20.

The Zacks Consensus Estimate for third-quarter fiscal 2021 revenues is pegged at $7.80 billion, suggesting 1.1% rise from the year-ago reported number.