In a bid to expand its footprint across United States, Choice Hotels International, Inc. (CHH - Free Report) announced the opening of the Cambria Hotel Detroit-Shelby Township. This marks the second location for the Cambria Hotels brand in Michigan (after Cambria Hotel Traverse City) and the fifth new hotel opening since June 2020. Markedly, the new hotel will be joining the likes of properties in Greenville (South Carolina), Madeira Beach (Florida), Ocean City (Maryland) and Sonoma (California).

Janis Cannon, senior vice president, upscale brands, Choice Hotels, stated, "The opening of the Cambria Hotel Detroit-Shelby Township is a tremendous example of the hard work put in by all Cambria stakeholders to increase the brand's footprint around the U.S., even while facing a challenging travel and construction environment.”

Alongside domestic growth, the company continues to expand its international footprint. The key international operating markets include Spain, Colombia, Panama, the Caribbean and Canada. Currently, the company has more than 50 hotels (open or in the pipeline), thereby suggesting strong growth in its coast-to-coast expansion.

In the past six months, shares of Choice Hotels have gained 30.3% compared with the industry’s 40.3% rally. 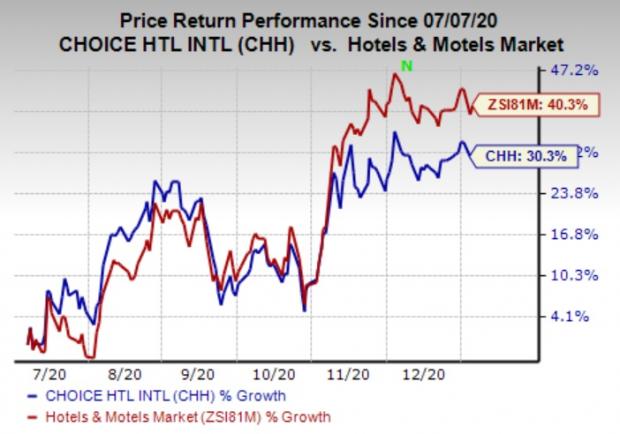 Acushnet has a trailing four-quarter earnings surprise of 12.9%, on average.

YETI Holdings has a three-five year earnings per share growth rate of 18.3%.

5 Cloud Stocks to Watch Amid Rising Shift to Digitization