Majority of work involved with this deal will be carried out in Shelton, CT.

With rising security threats across the globe, emerging economies like Asia Pacific, the Middle East and South America are spending rapidly to enhance their defense arsenals. Meanwhile, developed nations like the United States and Europe have already been leading the defense market.

It is imperative to mention in this context that military aircraft, including helicopters that are used in combat and rescue operations, forms an integral part of a country’s defense products. Emerging trends in the combat aircraft space like fifth-generation technology aircraft, advanced composite materials and stealth technology have been substantially driving demand for military jets and helicopters.

This must have set the stage for a smooth flow of contracts involving production and subsequent upgrades of attack helicopters from Pentagon, as well as other U.S. allies. The latest contract win is a bright example.

Lockheed’s Sikorsky unit provides military and rotary-wing aircraft to all five branches of the U.S. armed forces, along with military services and commercial operators in 40 nations. Hence, this unit serves as a major revenue generating division for this defense contractor.

In particular, CH-53K helicopter takes forward Sikorsky’s 50 years of manufacturing and operational success with CH-53A, CH-53D/G and CH-53E predecessors. The new heavy lifter allows the U.S. Marine Corps and international militaries to move troops and equipment from ship to shore, and to higher altitude terrains more quickly as well as effectively.

In line with its usual trend, third-quarter 2020 revenues at Lockheed Martin’s RMS unit increased a solid 8% year over year, with Sikorsky helicopter programs being the primary growth driver.

With the fiscal 2021 defense budget offering investment potential worth $57billion in Aircraft, including $1.5 billion for Sikorsky CH-53K, we expect Lockheed’s RMS unit to receive consistent order flows from Pentagon like the latest one. This, in turn, should maintain top-line growth for the unit in the coming days.

Looking ahead, the global attack helicopter market is estimated to witness a CAGR of more than 4% over the 2020-2025 period, per the latest forecast made by market research firm, Mordor Intelligence. This indicates solid growth opportunities for prominent combat helicopter manufacturers like Lockheed, Boeing (BA - Free Report) , Textron ((TXT - Free Report) ) and Airbus (EADSY - Free Report) .

Shares of this Zacks Rank #3 (Hold) company have lost 16.8% in the past year compared with the industry’s 26.6% decline. You can see the complete list of today’s Zacks #1 Rank (Strong Buy) stocks here. 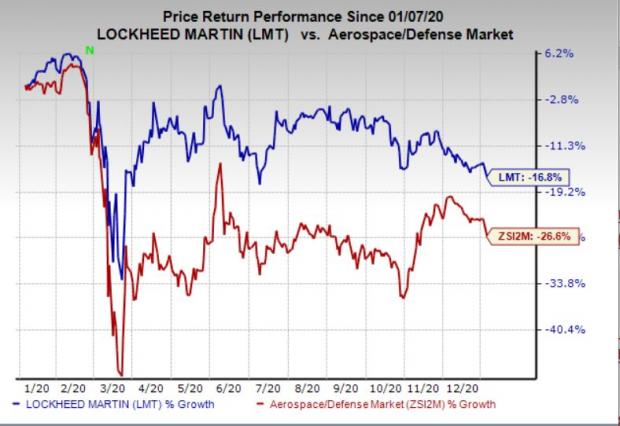