Most analysts opine that the recent water-crossing rules proposed by the Virginia Department of Environmental Quality (“DEQ”) could delay the initiation of the natural gas pipeline from late 2021 to 2022. But despite the latest setback, MVP assured to complete the pipeline installation on schedule with estimated costs of $5.8-$6 billion. The construction began in the first quarter of 2018.

The pipeline system has a diameter of up to 42 inches and is expected to have a transmission capacity of 2 billion cubic feet (Bcf) per day to markets in several regions of the United States. Notably, the environmental regulators stated that natural gas pipelines, with a diameter greater than 36 inches, fail to meet the requirements of Nationwide Permit 12, which, so far, granted MVP the ability to install pipes through waterways. In other words, MVP will have to apply for permits to install pipes, stream by stream.

Earlier, MVP received authorization from FERC to recommence construction work of another 17 miles near the Jefferson National Forest. This was because the commission stated that Mountain Valley produced satisfactory evidence to demonstrate that the resumption of a 17-mile segment construction of the pipeline on private lands would not affect the forest.

At present, Virginia DEQ needs pipelines with a larger diameter to seek individual stream-crossing permits rather than using the Nationwide Permit program, which covers all stream crossings with one permit. This is expected to push forward the in-service date into 2022.

Notably, FERC claimed that the best approach to restrict environmental degradation is to complete the long-delayed project and the court’s decision does not necessarily mean it will outweigh the pipeline construction. It has extended the project’s time-limit for another two years. Importantly, Equitrans’ Mountain Valley aims to complete the interstate pipeline by the end of 2021.

The company’s shares have underperformed the industry in the past six months. Its stock has declined 16.2% against the industry’s 12.7% growth. 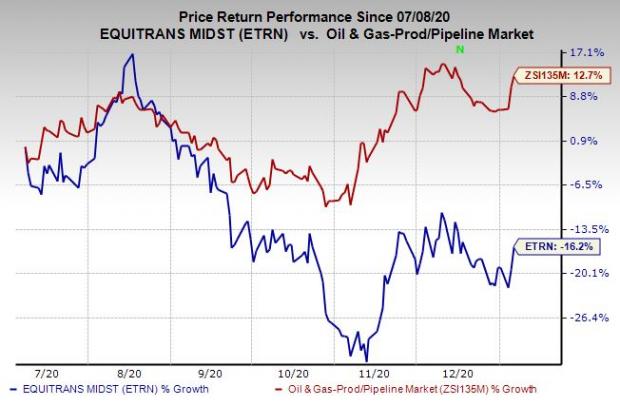