Nokia Corporation (NOK - Free Report) has inked a deal with Tideworks Technology — a wholly owned subsidiary of Carrix, Inc. — to deploy its Digital Automation Cloud (DAC) at the Port of Seattle, Terminal 5.

Tideworks is a full-service provider of terminal operating system solutions for marine and intermodal terminal operations. Port of Seattle, Terminal 5 is part of the Northwest Seaport Alliance, one of the largest container gateways in North America. Terminal 5 is undergoing a major modernization project to handle ultra-large container ships.

Nokia aims to accelerate its product roadmaps and cost competitiveness through additional 5G investments. The company has been developing its 5G portfolio, strengthening AirScale and advancing the capabilities of its ReefShark chipset. It currently has 138 commercial 5G deals with service providers.

Nokia’s shares have lost 0.5% in the past year against 38.1% growth of the industry. 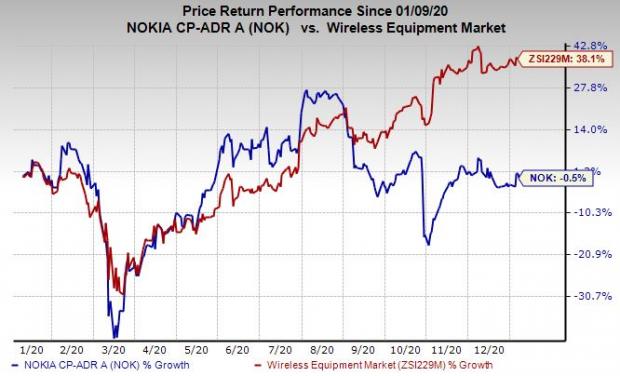 Ubiquiti delivered a trailing four-quarter positive earnings surprise of 27.9%, on average. The company’s earnings beat the Zacks Consensus Estimate in three of the last four quarters.

Aviat delivered a trailing four-quarter positive earnings surprise of 11.8%, on average. The company’s earnings beat the consensus estimate in three of the last four quarters.

Comtech delivered a trailing four-quarter positive earnings surprise of 2%, on average. The company’s earnings beat the consensus estimate in two of the last four quarters.