Robotics technology is constantly gaining steam in the fast-paced world on the back of robust demand for automation, which increases efficiency and ease of work, and saves both time and labor.

Further, the growing integration of AI and Machine Learning (“ML”) with machines has made the robotics technology extremely dynamic and innovative, which, in turn, is bolstering the adoption of robots across major sectors, including industrial, automotive, electronics, healthcare, retail, agriculture, and food & beverages.

The coronavirus pandemic has boosted the scope of robots. The automatic interactive machines are capable to address the manpower shortage issue, which has been one of the major concerns across many disrupted sectors, especially healthcare, amid the pandemic.

For instance, robots from UVD Robots are highly in demand in hospitals as they are very efficient for cleaning and disinfecting. This helps in reducing the spread of viruses and bacteria, thus, narrowing down patients and frontline workers’ risks of catching infectious diseases.

We note that robots, especially cleaning bots, are coming mainstream and are likely to witness further traction in the coronavirus-hit world.

We believe that robotics, as a field, holds immense potential in the days ahead, courtesy of continuous advancements in AI and ML, and improvements in machine vision and sensors.

Per a report by Mordor Intelligence, the global robotics market is expected to see a CAGR of 25.4% between 2020 and 2025.

Here we focus on fivestocks that hold strong fundamentals to capitalize on the growth prospects present in the robotics market. 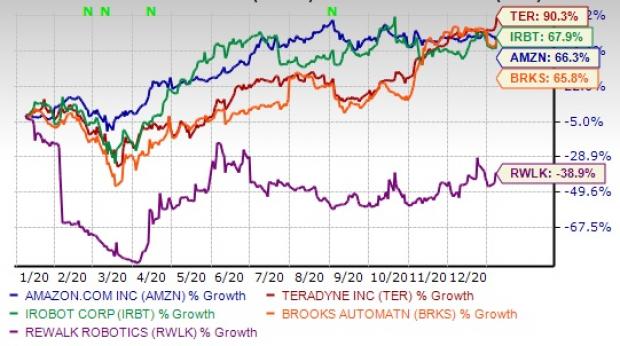 Books Automation (BRKS - Free Report) is a provider of automation, vacuum and instrumentation solutions. It caters to the automation requirements in the semiconductor manufacturing markets. The company, which flaunts a Zacks Rank #1 (Strong Buy) at present, is best known for its industry-leading vacuum robots and atmospheric robotics modules, which act as semiconductor wafer-handling robots.

Notably, the robots are well-equipped to handle wafers of all sizes, thin or bonded, and specialized wafer carriers. Further, the robots help in proactive monitoring and upgrading equipment productivity.

Amazon (AMZN - Free Report) , which is a dominant player in the e-commerce space, is making every effort to reinforce retail capabilities with robotics. Its strengthening robotics arm, Amazon Robotics, is a major positive.

Further, the company’s acquisition of the robotic startup Canvas Technology remains noteworthy. We note that Canvas Technology is best known for its fully autonomous cart systems that are of great use in fulfilment centers as they aid in shifting goods around warehouses.

Further, Amazon’s buyout of robotics company Kiva Systems is a major positive. The acquisition aided this Zacks Rank #3 (Hold) company in introducing two kinds of robots for its fulfilment centers — Xanthus and Pegasus.

iRobot (IRBT - Free Report) is one of the leading manufacturers of robots worldwide. The company’s offerings in the consumer sector include highly advanced products — Roomba Vacuums, Braava Mops and Terra Mows. This Zacks Rank #3 company is also benefiting from strengthening global household adoption rates of its Roomba and Braava products.

Teradyne (TER - Free Report) , a leading provider of automated test equipment, made its foray into the robotics market with the acquisition of Universal Robots, which is best known for cobots (collaborative robots), which are cost-effective, safe and flexible to deploy.

Further, this Zacks Rank #3 company’s acquisitions of Energid Technologies and MiR remain major positives for its deepening focus in the field of robotics. Further, the company is gearing up to build a huge cobot hub in the city of Odense by investing $36 million.

ReWalk Robotics (RWLK - Free Report) is known for its innovative solutions in the medical science space. The company’s ReWalk is a wearable robotic exoskeleton, which is the first of its kind to receive FDA clearance for personal and rehabilitation use in the United States.

The exoskeleton helps patients with spinal cord injury to stand, walk, turn, climb and descend stairs as it provides hip and knee motion and support. The growing demand for ReWalk is expected to boost this Zacks rank #3 stock’s prospects in the healthcare sector.