Canadian Solar Inc.’s (CSIQ - Free Report) subsidiary, Recurrent Energy, has recently completed the sale of the 144 megawatts alternate current (MWac) Pflugerville Solar project to Duke Energy Renewables, a subsidiary of Duke Energy Corp. (DUK - Free Report) . The project is under construction and expected to achieve commercial operation in mid-2021. The energy generated from the Pflugerville Solar project will be sold to Austin Energy under a 15-year power purchase agreement (PPA).

A Brief Note on the Pflugerville Solar Project

The Pflugerville Solar project has a generation capacity of 144 MWac, which can generate enough energy to power approximately 27,000 homes. The power plant will utilize approximately 489,600 pieces of Canadian Solar's high-efficiency bifacial BiKu modules across 932 acres in Travis County, TX.

With a rapidly expanding solar market across the globe, monetization of projects is significantly favoring solar players and boosting their operational performance. Canadian Solar currently caters to a geographically-diverse customer base spread across key markets in the United States, China, Japan, the U.K. and Canada as well as emerging markets in Italy, India, Mexico and Germany, among others. Given its strong global presence, the strategy of project monetization tends to boost this solar player’s profits.

Another solar company following a similar strategy is ReneSola (SOL - Free Report) , which in December 2020, sold a 16-MW portfolio of solar parks in Poland to Modus Asset Management, a renewable energy investment company that invests in the Polish solar market.

The global solar market, which suffered a setback following the COVID-19 outbreak in March, is steadily recovering and heading toward a positive growth trajectory. This has been encouraging major solar industry players to engage in strategic transactions to expand their footprint in the global solar market.

Canadian Solar currently has a Zacks Rank #4 (Sell). Its shares have gained 36% in the past three months, outperforming the industry’s growth of 32.5%. 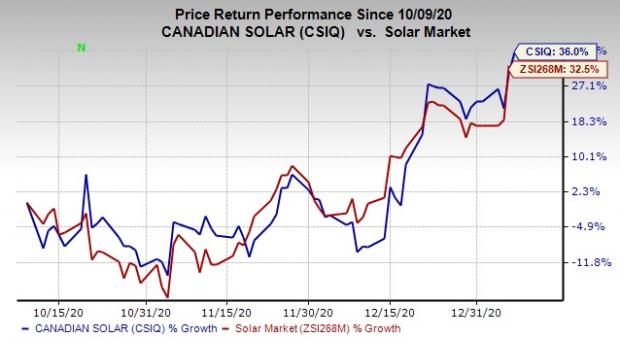