The multi-year observational research study, to be launched later this year, aims to determine whether the Apple Watch and iPhone can collect and transmit biometric data on cognitive performance.

Markedly, about 15-20% of adults aged 65 years or older experience MCI. According to report from National Institute of Aging, 80% of those who meet the definition of amnestic MCI (where memory is significantly impaired) will develop Alzheimer's disease within seven years.

The study is designed to ensure consumer privacy, control, and transparency, with a focus on data security.

Apple’s shares have soared 62.8% in the past year, outperforming the S&P 500’s gain of 17.4%. The solid adoption of Apple Watch Series 6, which features a blood oxygen sensor with additional healthcare and fitness features like Cycle Tracking, the Noise app and Activity Trends, has helped the iPhone maker strengthen its presence in the personal health monitor space. 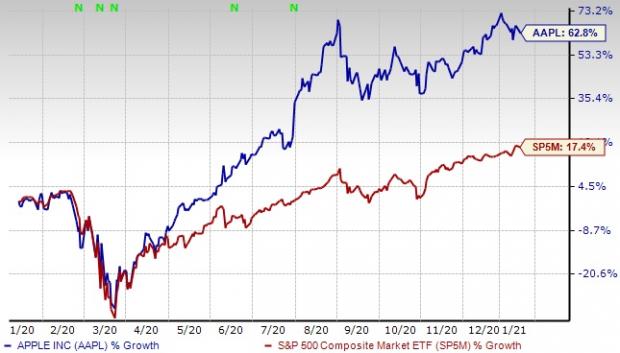 Markedly, the Apple Watch has been used for a number of health studies including a hearing study monitoring ambient sound volumes, conducted through the Research app.

In October, the iPhone-maker announced the availability of the Health Records feature within the Health app for users in the United Kingdom and Canada. The feature helps users view and store their medical records on their iPhone’s secured environment without compromising privacy.

Also, with the help of watchOS 7, Apple Watch uses multiple sensors, which comprise optical heart sensor, GPS, and accelerometer to monitor the cardio health of the users and notify them if it falls to lower levels.

Notably, per IDC’s latest report, global shipments of wearables grew 35.1% year over year to 125 million in the third quarter of 2020.

This Zacks Rank #3 (Hold) company’s Wearables, Home and Accessories segment, which includes Apple Watch, reported revenues of $7.88 billion, up 20.8% year over year in fourth-quarter fiscal 2020, primarily driven by significant momentum in Apple Watch. Moreover, more than 75% of customers who purchased Apple Watch during the fourth quarter were first-time customers. You can see the complete list of today’s Zacks #1 Rank (Strong Buy) stocks here.

However, intensifying competition from the likes of Amazon, Fitbit, Garmin (GRMN - Free Report) , and Samsung could hurt Apple’s position in the wearables market in the long run.