With renewed lockdowns in the UK, Ireland and some other countries in Europe following the surge in coronavirus cases with the new COVID strain being found in the United Kingdom last month, European low-cost carrier Ryanair Holdings (RYAAY - Free Report) trimmed its forecast for fiscal 2021 (ending Mar 31, 2021) traffic.

Delta Air Lines (DAL - Free Report) and United Airlines (UAL - Free Report) were also in news, courtesy of their managerial decisions to revise their policies pertaining to emotional support animals on their flights. The move followed the U.S. Department of Transportation’s (DOT) decision to tighten the rule pertaining to passengers travelling with service animals on board. Update on American Airlines’ (AAL - Free Report) move on the above issue was mentioned in the previous week’s write-up.

Meanwhile, gross revenues at the Latin American carrier Gol Linhas (GOL - Free Report) surged 52% to R$852 million in December on a month-over-month basis as air-travel demand picks up in the carrier’s domestic markets. Notably, Gol is currently operating all the bases in its domestic network

1. Ryanair expects its January traffic to be less than 1.25 million. The expectation is much less than the air traffic of 1.9 million recorded in December. The effect of a fresh shutdown is expected to be more emphatic on the traffic numbers of February and March. This European carrier, currently carrying a Zacks Rank #3 (Hold), expects traffic in each of these two months to be as low as 500,000.  Naturally, the carrier lowered its traffic forecast for fiscal 2021. It now expects the metric for the period in the 26-30 million range compared with its earlier prediction of below 35 million.

2. From Jan 11, 2021, United Airlines is allowing only service animals to accompany passengers in cabins free of cost. However, for tickets booked before the said date to travel on or before Feb 28, 2021, the airline is continuing with its usual policy of transporting emotional support animals free of cost. Customers planning to fly with their animals (that are not service animals) after Feb 28 will have to pay a service charge of $125 each way for carrying them in cabins or in cargo hold.

Delta is also not accepting bookings pertaining to emotional support animals on its flights Jan 11 onward. However, the carrier is allowing passengers, who already booked tickets prior to the specified date, to travel with their emotional support animal(s) as scheduled. Per the DOT’s new ruling, only dogs qualify as service animals. Going by the more stringent regulation, a service animal is defined as a “dog that is individually trained to do work or perform tasks for the benefit of a person with a disability”.

3. Gol Linhas’ management stated that load factor (% of seats filled by passengers) was 81% in December, reflecting the uptick in air-travel demand. This January, the airline plans to operate approximately 550 flights per day and nearly 620 daily flights on peak days, representing 65% of last January’s domestic flight schedule. For the fourth quarter of 2020 (detailed results of which will be available on Feb 25), Gol Linhas estimates EBITDA margin to be 30-32%. Meanwhile, EBIT margin is expected to be 18-20%. Average fuel price per liter is anticipated between R$2.31 and R$2.37. Total demand and capacity are expected to be down 42% each in the fourth quarter. Meanwhile, total seats are estimated to plunge 46% year over year.

4 At Azul (AZUL - Free Report) , consolidated traffic (measured in revenue passenger kilometers) declined 31.4% year over year to 2.03 billion due to a 10.6% drop on the domestic front and an 85.3% fall, internationally. On a year-over-year basis, consolidated capacity (measured in available seat kilometers) decreased 28.4% to 2.54 billion. This downside was caused by a 9% contraction in domestic capacity and an 81.4% plunge in international capacity. With traffic decline outpacing capacity reduction, load factor deteriorated 350 basis points to 80%.

5. As air-travel demand for leisure continues to improve, Alaska Air Group’s (ALK - Free Report) subsidiary Alaska Airlines plans to introduce two routes from Southern California during the spring season. Starting Mar 18, 2021, the airline will begin a daily non-stop service connecting Los Angeles and Austin. On May 20, services on this route will increase to three departures on a daily basis. With the new flight service to Austin, the carrier will fly to more than 40 non-stop destinations from Los Angeles this spring. Moreover, a daily non-stop flight between San Diego and New York will commence on Apr 4. This nonstop operation is part of Alaska Air's expansion in the Northeast. During springtime, the airline will have a non-stop service connecting San Diego with both Newark and Boston. 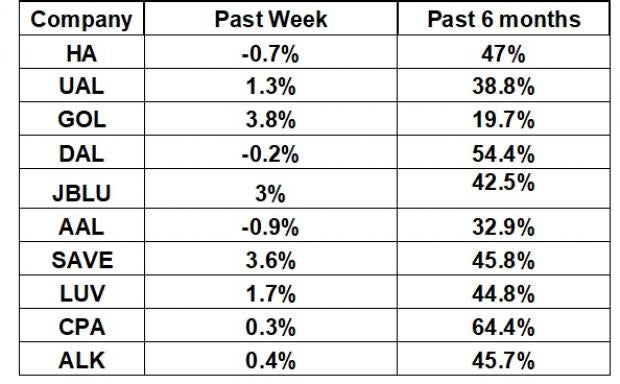