Honeywell International Inc. (HON - Free Report) , on Jan 13, launched the latest version of its Cabin Pressure Control and Monitoring System (CPCMS). As noted, the company’s fourth-generation system, which is lighter and more reliable, can be customised for several types of aircraft, including commercial and military.

Honeywell’s shares moved up 0.8% to eventually close the trading session at $208.61 yesterday.

Honeywell’s CPCMS facilitates operators in effectively monitoring and controlling the air pressure inside the aircraft. The system regulates the air inside aircraft cabins, thus ensuring safe and pleasant travel experience for passengers. It also helps in managing the rate of change in pressure, particularly during the aircraft’s climb and descent phases.

Weighing less than six pounds, the system also features a new digital controller and is suitable for further upgrades. It’s worth mentioning that Honeywell has secured a deal from Piaggio Aerospace to offer its new CPCMS for the latter’s P.180 Avanti Evo aircraft.

Honeywell, with a $146.4 billion market capitalization, currently carries a Zacks Rank #3 (Hold). The company stands to gain from strength across its defense and space businesses. Also, solid demand for warehouse automation products and high backlog level bode well for its Intelligrated business. Weakness in the company’s commercial original equipment business, on account of lower air transport and slowdown in original equipment build rates, is likely to affect its near-term performance.

In the past three months, the company’s share price has increased 19.9% compared with the industry’s growth of 15.8%. 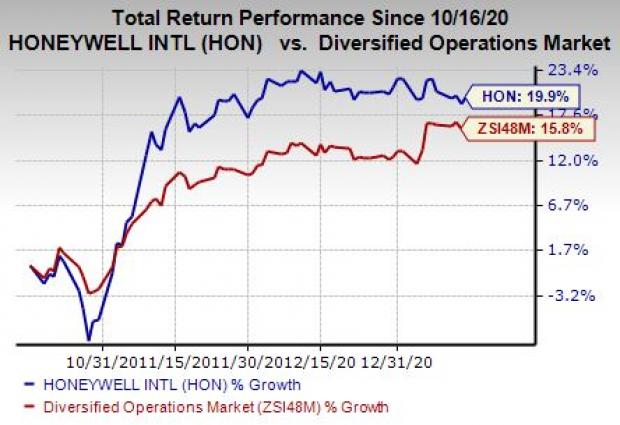 Deere & Company delivered a positive earnings surprise of 52.55%, on average, in the trailing four quarters.

Danaher delivered a positive earnings surprise of 17.00%, on average, in the trailing four quarters.

Raven delivered a positive earnings surprise of 126.84%, on average, in the trailing four quarters.