Ameren plans to achieve the above goal by investing $4.5 billion by 2030, including investing in the Atchison and High Prairie renewable energy centers, which will add 3,100 MW of solar and wind power generation to its portfolio. In addition to making acquisitions and setting up new clean energy-based power projects, it is shutting down coal-fired electricity generating units. Ameren aims to retire 75% of coal-based generation units by 2039 and retire all coal-based units by 2042.

To mitigate the deadly effects of climate change in the United States, utilities are increasingly adopting renewable energy sources to produce electricity, with wind and solar energies gaining popularity, in particular. The latest announcement made by Ameren is a bright example of that.

Per the latest forecast made by the U.S. Energy Information Administration (EIA), electricity generation from renewable energy sources is expected to rise from 20% in 2020 to 21% in 2021 and 23% in 2022, primarily driven by projected additions to the wind and solar generating capacities.

Notably, like Ameren, other utilities are also steadily progressing toward a carbon-free environment to make most of the growing renewable energy opportunities. For instance, Xcel Energy (XEL - Free Report) aims to achieve 80% carbon reduction by 2030 and 100% carbon-free electricity by 2050.

Ameren’s shares have lost 6.6% in the past year compared with the industry’s 9.2% decline. 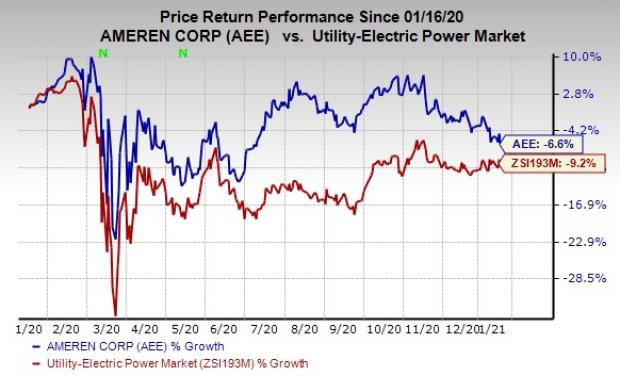