Ford (F - Free Report) is facing major production hurdles in India as a global supply shortage of semiconductors threatens the auto sector. In fact, the company recently announced that it has decided to extend the scheduled shutdown of its Chennai plant in India by another week on account of this shortage of semiconductors. The plant, which closed on Jan 14 for a three-day Pongal holiday, has extended the shutdown till Jan 24.

Besides this, production at the company’s Sanand plant in Gujarat will also be hampered due to the dearth of the raw material.

The U.S.-based auto giant expects the global semiconductor shortage issue to prevail through the first half of 2021. This will, hence, continue to impact vehicle production at its Chennai and Sanand plants in the coming months. Ford has already shut down one of its U.S. plants because of this obstacle.

The company is working closely with suppliers to solve the production constraints tied to this global shortage and is trying to prioritize crucial vehicle lines for production in order to ensure optimum allocation of the available semiconductors. Ford expects to start the Chennai plant by next week.

Semiconductors are silicon chips that perform control and memory functions, and are indispensable components of high-performing computer chips that power electronic devices like computers, mobile phones and other gadgets. With vehicles on the road becoming more like computers on wheels, automobiles are vastly automated, and require semiconductors for various applications, like engine controls and automatic braking systems.

When the pandemic hit the economy, the auto sector bore severe brunt of the crisis, with auto sales hitting rock bottom in the second quarter of 2020. Amid the tanking auto sales, semiconductor manufacturers shifted their production capacities to other sectors such as consumer electronics.

Nonetheless, with the global economy gradually recovering from the mayhem caused by the pandemic, auto sales managed to rebound faster than anticipated, especially in China, the world’s largest car market. This encouraged major automakers to ramp up production and replenish weak inventories at dealerships.

Amid this gloomy scenario, the entire auto sector is feeling the heat of the deficit of semiconductors. Toyota Motor’s (TM - Free Report) Chinese plant, Volkswagen’s (VWAGY - Free Report) factories in Germany and Honda’s (HMC - Free Report) U.K. plant have all seen production disruptions because of this problem.

Reportedly, Ford will delay deliveries for hundreds of its Mustang Mach-E vehicles to perform additional quality checks. The auto bigwig began delivering the Mach-E SUV last December, but it was later discovered that the upcoming delivery dates for some buyers have been pushed back by the company. In fact, some delays add more than a month to the delivery of the vehicle because the company is executing extra quality checks.

The Mustang Mach-E SUV is Ford’s first update to the iconic Mustang brand ever, and the company’s newest launch meant to capitalize on the trending race to electric vehicle supremacy.

Notably, shares of Ford have appreciated 7.3% in the past year compared with its industry’s rally of 296.3%. 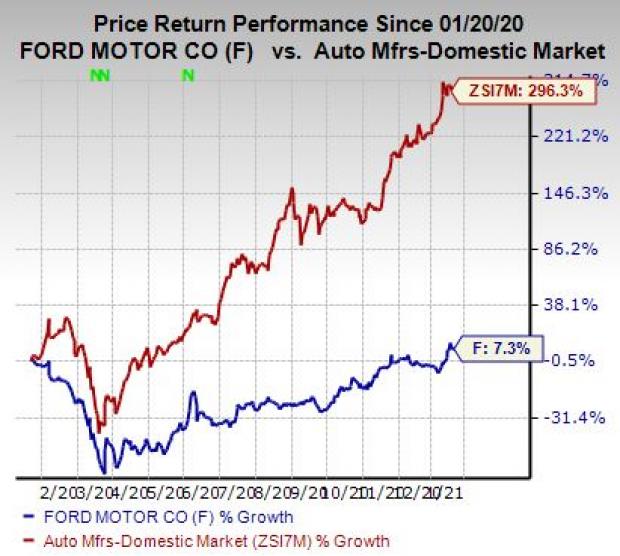