The growing proliferation of Augmented Reality (AR) in every major sector makes the technology promising. The importance of AR, which enables interaction between the real world and 3D virtual objects in real time, has been realized by several businesses in the coronavirus-hit world that has created a niche for virtual working and learning environment.

Moreover, the evolution of AR practices across consumer, automotive, healthcare, retail, gaming, entertainment, manufacturing, construction and tourism is expected to democratize the benefits of the underlined technology in the days ahead and aid in countering the disruptions caused by the pandemic efficiently.

The use of AR modeling and 3D visualization in surgeries, AR-powered head-up displays in vehicles, AR solutions in e-commerce as well as in-store retailing, photorealistic AR in smartphones, and 3D AR modeling in education among others remain noteworthy.

Further, AR holds the capability of informing diners about nutritional facts related to the food that they would order at restaurants. Also, the technology is capable of providing a 360-degree visualization of hotel rooms, restaurants and tourist destinations to travelers.

We note that the growing number of use cases as well as emerging new usages of the technology under review islikely to give a significant boost to the spending rate over the same.

This is evident from the latest IDC report, which indicates that spending on AR/VR (Virtual Reality) across the world is expected to reach $72.8 billion in 2024 by witnessing a CAGR of 54% between 2020 and 2024.

Further, a Research and Markets report shows that the global market for AR/VR is anticipated to generate revenues of $1,274.4 billion by witnessing a CAGR of 42.9% between 2020 and 2030.

Let’s delve deeper into how the following tech bigwigs are well-poised to capitalize on the growth opportunities present in the promising space. 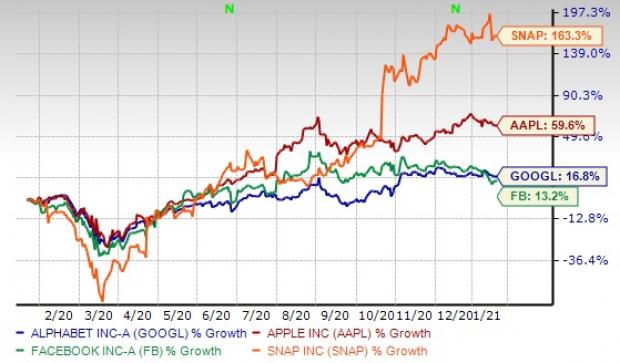 Alphabet’s division Google is leaving no stone unturned to bolster its footprint in the AR market. The growing momentum of Google Glass Enterprise Edition 2, the company’s AR headset, remains a major positive. This product is capable of aiding businesses in improving work efficiency by allowing them to provide employees with hands-free access to visual information.

Further, the company’s image recognition technology — Google Lens, which enables users to search what they see by scanning the object or text using their mobile cameras — remains noteworthy in the field of AR. Notably, Google Lens turned out to be of great use in translation, shopping and solving educational queries.

Apart from this, Google integrated AR skills into Google Shopping, which is another positive. Also, the availability of 3D and AR features in all languages in Google Search delivers enhanced search results.

Additionally, the company’s strong efforts to provide AR experience in gaming remain tailwinds. Google recently teamed up with Lucasfilm to introduce “The Mandalorian” AR Experience”, which brings iconic moments in the first season of The Mandalorian to life.

Facebook is gearing up to launch its first pair of smart glasses, backed by AR technology. The company partnered with the maker of Ray-Ban called Luxottica for this purpose.

Additionally, the company’s tie-up with Plessey Semiconductors bodes well for its growing AR initiatives. Facebook’s prototype will be leveraging Plessey’s LED manufacturing operations to create technologies for potential use in the AR/VR space.

Apple is also gaining steam to release its AR headset and AR glasses to strengthen its presence in the AR market. It is reportedly working on two AR projects to introduce these devices.

Additionally, the iPhone-maker is working on a common operating system (called rOS) for AR and VR. Apart from this, the company’s new AR tool namely Quick look that allow users to see certain products directly in their environment, remains a positive.

Also, the company’s offering of Reality Kit and Reality Composer is driving its momentum across the developers.

Snap is riding on its robust AR offerings, which include AR lenses, games and Spectacles AR glasses. Further, this Zacks Rank #2 company’s AR tool called Scan, which uses visual search technology, is gaining solid momentum. Notably, Scan enables users to interact with anything they see through their phone camera.

Additionally, the company’s new tool Landmarkers, which helps in overlaying AR on the world, remains noteworthy.

Further, Snap’s Lens Web Builder, a web-based, AR Lens production tool, which allows advertisers to create AR Lenses easily and instantly, is another positive development. All these are expected to continue to bolster the company’s presence in the AR space.