Q-LNG is a LNG transportation company aimed at delivering natural gas with utmost safety to all the ports it serves, and intends to become a leading LNG infrastructure provider in the United States and abroad.

Notably, LNG brings down the greenhouse gas emissions by about 21% for 2-stroke engines and up to 15% for 4-stroke medium speed engines compared with heavy oils. Beside this, it permits a significant reduction in pollution from nitrogen oxides and hazardous airborne particles compared with regular marine fuels. Importantly, this fuel type also meets the 2020 International Maritime Organization (“IMO”) fuel sulfur regulations.

With support from society and customers, Shell aims to become a low-carbon energy company by 2050 or sooner and opines that LNG has an essential role to play to lower emissions from shipping.  Hence, the oil and gas major hopes that the development of the world’s largest LNG fuelling network of ports and bunker vessels along the commercial routes will prove beneficial.

The ATB marks a significant step toward the LNG fuelling network development and facilitates additional emission reductions. Notably, the Q-LNG 4000 barge adds to the oil major’s global network of six operating LNG bunker vessels to address the increasing demand for cleaner marine fuels. It has a fuel capacity of 4,000 cubic meters.

On its part, the ATB demonstrates a critical part of the LNG infrastructure along the southeast coast of the United States and an important step for safe, reliable transportation and delivery of LNG in North America.

Shell is one of the primary oil majors — a group of U.S. and Europe-based big energy multinationals — with global operations. The company is fully-integrated, as it participates in every aspect related to energy from oil production to refining and marketing.

The company’s shares have outperformed the industry in the past three months. The stock has gained 63.7% compared with the industry’s 43.1% growth. 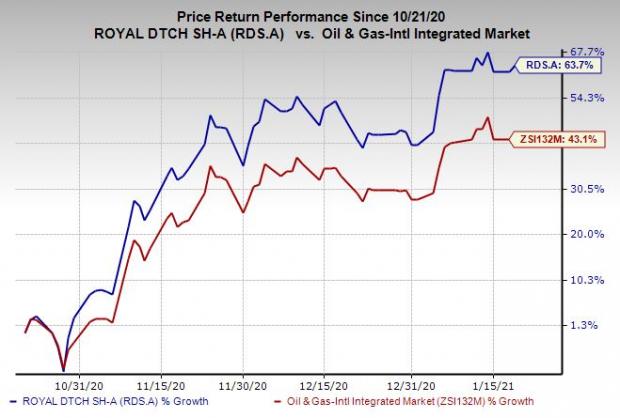 Diamondback’s earnings for 2021 are expected to increase 55% year over year.