Any coronavirus vaccine-related development will be in the spotlight besides the regular pipeline and regulatory updates in the biotech sector.

Alexion Pauses Enrollment in COVID-19 Study on Ultomiris: Alexion (ALXN - Free Report) announced that it will pause further enrollment in the global phase III study of Ultomiris (ravulizumab-cwvz) in adults with severe COVID-19 requiring mechanical ventilation. This decision was based on the recommendation of an independent data monitoring committee (IDMC), following their review of data from a pre-specified interim analysis.  A pre-planned interim analysis of the primary endpoint — survival at day 29 — once 122 patients completed the 29-day primary evaluation period was the basis of the recommendation.

Aclaris Surges on Arthritis Trial Data: Aclaris Therapeutics, Inc.’s (ACRS - Free Report) shares skyrocketed 220% after it released positive preliminary top-line results from a 12-week, phase IIa trial to investigate the safety, tolerability, pharmacokinetics and pharmacodynamics of ATI-450, an investigational oral MK2 inhibitor, in subjects with moderate to severe rheumatoid arthritis (RA) (ATI-450-RA-201). The data showed that ATI-450 demonstrated durable clinical activity, as defined by a marked and sustained reduction in DAS28-CRP and the evaluation of ACR20/50/70 responses over 12 weeks. The mean change from baseline in DAS28-CRP score at week 12 was a 2.0 reduction in the treatment arm compared to a 0.35 increase in the placebo arm. The data support the progression of ATI-450 to phase IIb.  ATI-450 was generally well tolerated.

Biohaven Down on Alzheimer's Disease Study Data:  Shares of Biohaven (BHVN - Free Report) were down after it announced disappointing data from its phase II/III study of troriluzole as a symptomatic treatment in mild-to-moderate Alzheimer's disease (AD). This preliminary analysis showed that troriluzole is not efficacious as a symptomatic treatment in a mixed population of patients with mild and moderate AD. Troriluzole did not statistically differentiate from placebo at 48 weeks on the study's prespecified co-primary endpoints on the Alzheimer's Disease Assessment Scale-Cognitive Subscale 11 (ADAS-cog) and the Clinical Dementia Rating Scale Sum of Boxes (CDR-SB) in study participants with mild-to-moderate AD. Troriluzole also did not differentiate from placebo on the key secondary measure of hippocampal volume assessed by magnetic resonance imaging (MRI) in the overall population.

Gritstone Surges on COVID-19 Vaccine Progress: Shares of clinical-stage biotechnology company Gritstone Oncology, Inc. (GRTS - Free Report) surged after it announced that it is advancing the development of a second-generation vaccine against SARS-CoV-2 with potential for both prolonged protection and potency against Spike mutants. Gritstone entered into a clinical trial agreement with the National Institute of Allergy and Infectious Diseases (NIAID), part of the National Institutes of Health, to initiate clinical testing of this next-generation vaccine. A phase I study, expected to be conducted through the NIAID-supported Infectious Diseases Clinical Research Consortium (IDCRC), is in development.

Lexicon Up on Regulatory Updates on Sotagliflozin: Lexicon Pharmaceuticals, Inc. (LXRX - Free Report) gained after it received positive FDA regulatory feedback on sotagliflozin in response to a request made by the company following the completion of the SOLOIST and SCORED studies relating to the potential submission of a new drug application (NDA).  Per the FDA feedback, the results of phase III studies, SOLOIST and SCORED, can support an NDA submission for an indication to reduce the risk of cardiovascular death, hospitalization for heart failure, and urgent visits for heart failure in adult patients with type 2 diabetes with either worsening heart failure or additional risk factors for heart failure.

The Nasdaq Biotechnology Index gained 4.08% in the last four trading sessions. Among the biotech giants, Regeneron gained 5.56% during this period. Over the past six months, shares of Alexion have rallied 44.89%. (See the last biotech stock roundup here: Biotech Stock Roundup: Updates From REGN, GILD & VIR, CVAC Teams Up With BAYRY). 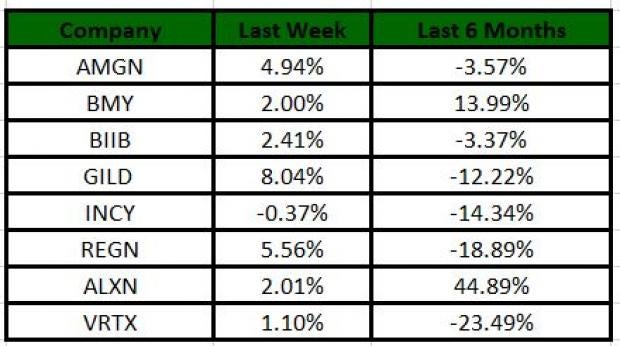