Equinor ASA (EQNR - Free Report) recently announced that it has divested Athabasca Oil Corporation stake, marking its complete retreat from Canadian oil sands. The company is expected to shift focus from onshore assets in the country to offshore East Coast projects located in Atlantic Canada. The company has moved its workers to St. John’s from Calgary, per Financial Post.

A few days back, the company announced the closure of downtown Calgary office. The move is estimated to slash its Canadian workforce by 30% from 120 workers. Following the transfer of workers, the company sold 100 million shares in Athabasca Oil Corporation (18.8% stake), which was acquired three years back. Each share was sold at 18 Canadian cents, bringing the total to C$18 million (around $14.3 million).

The company is not expected to look for opportunities in the onshore market in Canada, instead, it will likely focus on multiple offshore prospects in the country. Moreover, the Norwegian energy giant recently acquired 17 new production licenses on the Norwegian Continental Shelf, of which 10 licenses are to serve as operators and seven as partners. These licenses are major additions to Equinor’s exploration portfolio.

The new licenses are expected to provide a framework for further discoveries and will be carried out in conformity with Equinor’s climate ambitions to become a net-zero emissions energy business by 2050. Importantly, quitting Canadian oil sands operations might protect the company from higher degree of greenhouse gas emissions.

Shares of the company have gained 38.2%, outperforming the industry’s 31.3% rally in the past three months. 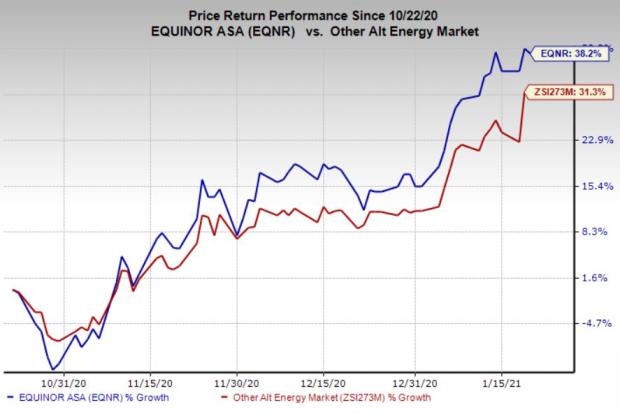 Cactus’ bottom-line estimates for 2021 have increased nearly 14% in the past 60 days.

Ameresco’s bottom line for 2021 is expected to increase 19.6% year over year.