Tetra Tech, Inc. (TTEK - Free Report) recently announced that it has secured a $25-million contract from the United States Agency for International Development (“USAID”). As part of the USAID Alternatives to Charcoal Activity, the five-year, single-award deal will involve the company to work on enhancing the consumption of renewable energy and reducing deforestation in Zambia.

It is worth mentioning that the USAID Alternatives to Charcoal Activity is designed to reduce charcoal energy consumption and fight climate change issues in Zambia, while helping to achieve poverty reduction.

The company’s analysts and consultants will be responsible for performing market research on obtainable technologies apart from gathering baseline data related to alternative energy usage issues and promoting renewable fuel technologies in the country. Notably, the project will facilitate the engagement of private sector in improving the availability of sustainable renewable energy solutions for urban population in Zambia.

Tetra Tech has clinched multiple government contracts in the past few months that have significantly supplemented its top line. In December 2020, the company clinched a $185 million, multiple-award contract from the U.S. Army Corps of Engineers to offer advanced solutions for U.S. federal government environmental programs. Also, in November 2020, it secured a $150 million, multiple-award contract from the U.S. Naval Facilities Engineering Command for providing architect and engineering services. Further, in October, it secured a five-year, single-award deal worth $24 million from USAID to support the latter’s Regional Water and Vulnerable Environment Activity in Central Asia.

The Zacks Rank #3 (Hold) company’s shares have gained 27.9% compared with 19.8% growth recorded by the industry in the past three months. 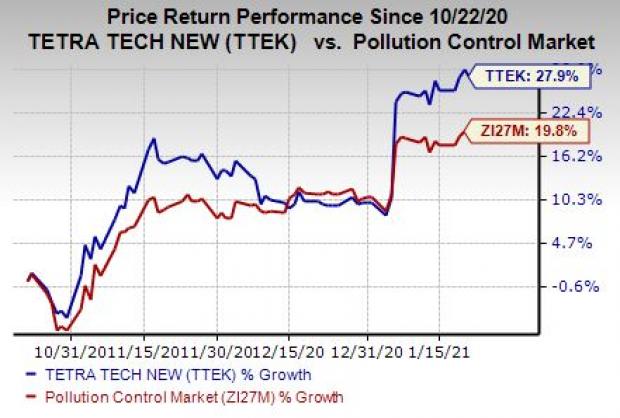 EnPro delivered a positive earnings surprise of 279.71%, on average, in the trailing four quarters.

Graco delivered a positive earnings surprise of 21.74%, on average, in the trailing four quarters.

Donaldson delivered a positive earnings surprise of 14.57%, on average, in the trailing four quarters.

Here's Why You Should Hold on to Grocery Outlet (GO) Stock