Intel (INTC - Free Report) reported fourth-quarter 2020 non-GAAP earnings of $1.52 per share, which beat the Zacks Consensus Estimate by 38.2%. However, the bottom line remained flat on a year-over-year basis.

Revenues totaled $19.978 billion, surpassing the consensus mark by 14.4%. However, the top line fell 1% on a year-over-year basis.

Markedly, on Jan 13, Intel announced that it has appointed Pat Gelsinger as the company’s new CEO. Current CEO Bob Swan will be stepping down from his role on Feb 15, 2021. During its fourth-quarter earnings conference, Gelsinger updated on the company’s progress in its 7 nanometer (nm) process technology. Notably, Gelsinger stated that “the majority of our 2023 products will be manufactured internally.”

This is likely to have affected investor sentiments, given that market might have competitive 3 nm products by 2023. Despite better-than-expected fourth-quarter results and encouraging guidance for first-quarter 2021, shares of the company declined more than 5% in the pre-market trading on Jan 22. 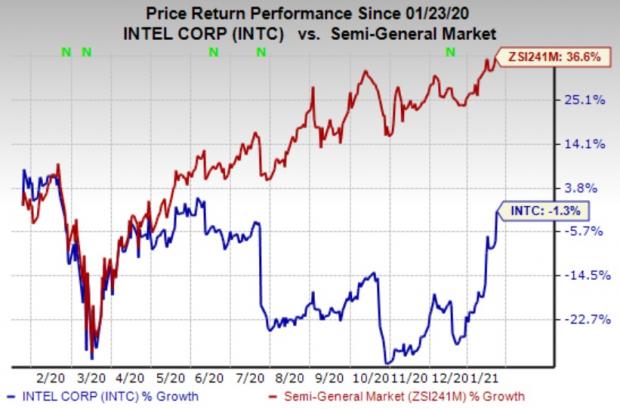 Notably, Intel stock has declined 1.3% in the past year against the industry’s rally of 36.6%.

Client Computing Group or CCG (54.8% of total revenues) represents Intel’s PC-centric business. The company bundles PCs, notebooks, 2-in-1s, tablets and other computing devices under the Client segment, which aids comparison with the PC market numbers provided by IDC and Gartner.

Revenues were up 9% on a year-over-year basis to $10.939 billion. Solid notebook demand driven by remote working and online learning trends triggered by COVID-19 contributed to the top line.

During the reported quarter, the chip maker witnessed growing clout of 11th Gen Intel Core processors (dubbed "Tiger Lake") integrated with Intel Iris Xe graphics. Management noted that more than 150 designs from major PC makers are in the market. Markedly, the new processors are based on Intel's 10 nm SuperFin process technology, which offers performance enhancement when compared to a full-node transition.

Intel noted that strong momentum in its 11th Gen Intel Core processors helped it in gaining market share with PC CPU units witnessing growth of 33% in the reported quarter.

DCG Platform unit volumes were down 9% year over year, and ASP declined 12% due to weaker enterprise and government volume.

Management is optimistic on growing popularity of latest Alder Lake processors for mobile and desktop PCs, and Sapphire Rapids for the data center. Both the products, currently sampling to customers, leverage enhanced SuperFin process technology and various architectural improvements.

Further, the chipmaker intends to upscale production ramp up of Alder Lake desktop and notebook in the second half of 2021, and Sapphire Rapids at the end of 2021.

During the reported quarter, the company ventured into the discrete graphics market with Intel Iris Xe MAX graphics, its first Xe-based discrete GPU.

The company is also shipping discrete graphics into thin and light notebooks from Acer, Asus, and Dell. Its first discrete GPU for the data center is already enabling enhanced cloud gaming experiences for clientele, which includes Tencent (TCEHY - Free Report) . The company has announced the gold release of oneAPI, its cross-industry open standards-based unified programming model that delivers a common developer experience across process architectures.

Investments to enhance networking workload convergence on Intel silicon yielded results. In 2020, the chipmaker’s Radio Access Network delivered advanced Xeon SoCs, FPGAs, and custom solutions for 5G base station designs and helped the company attain the goal of 40% share, two years ahead of its original target.

Internet of Things Group or IOTG revenues declined 16% from the year-ago quarter to $777 million. The coronavirus crisis-induced weakness in retail, vison and industrial end markets led to year-over-year decline.

Mobileye revenues improved 39% on a year-over-year basis to $333 million, courtesy of increasing proliferation of ADAS, ramp of new IQ programs and improvement in automotive production volumes.

Programmable Solutions Group or PSG (2.1%) revenues slumped 16% from the year-ago quarter to $422 million, due to sluggish demand across communications segment on account of customer 5G ASIC transitions.

Intel also has a residual segment, All Other (1.1%), which includes results of operations from other adjustments. The segment reported revenues of $211 million, up 102.9% year over year.

Non-GAAP gross margin in the reported quarter was 58.4%, which contracted 170 basis points (bps) on a year-over-year basis.

Non-GAAP operating margin contracted 420 bps on a year-over-year basis to 31.5%. This can be attributed to contraction in gross margin and increasing expenses.

In the fourth quarter, the company paid out dividends worth $1.4 billion.

During the third quarter, Intel had announced that it will repurchase shares worth $10 billion under the accelerated share repurchase (ASR) agreement by utilizing the existing cash resources. Markedly, the company repurchased a total of approximately $17.6 billion in shares as part of the planned $20.0 billion share repurchases announced in October 2019.

Markedly, the chipmaker intends to complete the remaining $2.4 billion balance in first-quarter 2021.

Intel anticipates momentum in consumer notebook PCs to continue in the first quarter, led by remote working and online trends.

Non-GAAP gross margin and operating margin is anticipated to be 58% and 30%, respectively.

Non-GAAP earnings are expected to be $1.10 per share. The Zacks Consensus Estimate is currently pegged at 97 cents.