The future of driving is autonomous as technological advancements and digitization in the mobility sector reach new heights with each passing day. Amid changing dynamics of the auto industry, a few companies announced strategic collaborations last week in a bid to rev up autonomous vehicle (AV) development.

General Motors recently inked a long-term strategic relationship with Microsoft for its Cruise autonomous driving venture. Partnership with the tech giant will help General Motors step up the commercialization of its self-driving technology. Cruise will take advantage of Azure, Microsoft's cloud and edge computing platform, to unravel the true potential of cloud computing for self-driving vehicles and commercialize its unique autonomous vehicles at large. Microsoft will also explore Cruise's deep industry expertise to enhance customer-driven product innovation and cater to transportation companies globally through persistent investment in Azure. Microsoft is a great inclusion to the General Motors team as the latter is aggressively working toward creating a world of zero crashes, zero emissions and zero congestion.

PACCAR recently entered into a global strategic agreement with Aurora to develop, test and commercialize its autonomous Peterbilt and Kenworth trucks. This collaboration will amalgamate PACCAR’s autonomous vehicle platform with the Aurora Driver to enhance the safety and operational efficiency of PACCAR customers. The partnership also encompasses vehicle validation by Aurora at the PACCAR Technical Center and production support in PACCAR’s plants. The aim of this collaboration is to enhance freight efficiency and safety for PACCAR customers. The Kenworth T680 and Peterbilt 579 trucks utilizing the Aurora Driver are expected to be rolled out in North America over the next few years.This partnership is Aurora’s first commercial application in trucking and takes the company a step closer to unraveling the true capability of the autonomous freight market.

Geely recently inked a strategic agreement with tech conglomerate Tencent to further develop its digital capabilities and smart car technologies, including intelligent cockpits, autonomous driving capabilities and low carbon emission technologies. The alliance encompasses the development of next-generation intelligent vehicle cockpits, amalgamating both Geely and Tencent ecosystems, rolling out new mobile and mobility service applications, as well as enhancing end-user experience. Within the autonomous vehicle landscape, the two parties will investigate simulated testing and validation of self-driving systems. Through this partnership, Geely and Tencent will focus on the development of green transportation solutions to achieve carbon neutrality.

Harley-Davidson (HOG - Free Report) announced new offerings for 2021 at a virtual launch held last week. Some of the new models to watch out include The Street Bob and the Fat Boy, which will now come with the larger Milwaukee-Eight 114 motor. Interesting features of the models will include LED headlamps, keyless ignition and more. Harley-Davidson’s CVO (Custom Vehicle Operations) models will come with a new audio system designed by Rockford Fosgate, and more color options as well as styling touches. Meanwhile, the company’s Touring has been revamped with upgraded equipment and cosmetic changes. The Road King Special and Street Glide Special will now be equipped with LED headlights, and come with new color schemes. Harley-Davidson currently sports a Zacks Rank #1 (Strong Buy). You can see the complete list of today’s Zacks #1 Rank stocks here.

Ford (F - Free Report) announced that it would issue a safety recall over contaminated windshield washer fluid, which does not comply with the Federal Motor Vehicle Safety Standards. The recall affects 286 vehicles, including 283 in the United States and three in Canada. Reference number for this recall is 21C01. Meanwhile, the U.S. auto giant is also set to recall around 3 million vehicles to replace defective Takata airbag inflators as the National Highway Traffic Safety Administration denied the firm’s petition to avoid the callback. Reportedly, the agency has given the automaker a 30-day time period to come up with a plan on how it would work toward fixing the recall. Affected vehicles include Ford Ranger, Fusion, Lincoln Zephyr/MKZ, MKX and the Mercury Milan, built between 2006 and 2012.

Below we highlight the price movement of some of the major auto players over the past week and six-month period. 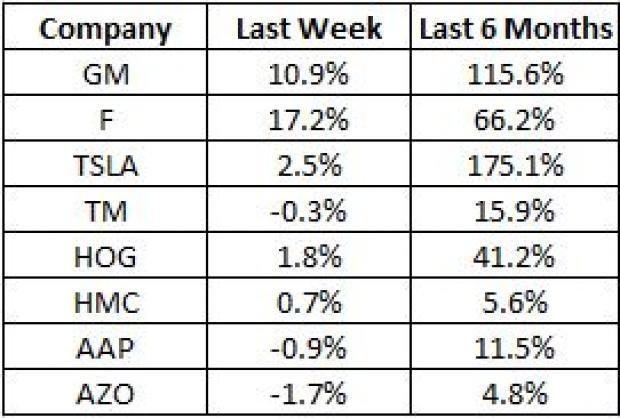 What’s Next in the Auto Space

Investors are keenly awaiting electric vehicle behemoth Tesla’s fourth-quarter results, scheduled to release on Jan 27. PACCAR is set to report quarterly results tomorrow before the opening bell. Also, quarterly reports of equipment suppliers including Autoliv, Oshkosh Corporation and Gentex Corporation will be released during the week.

Factors to Note Ahead of Diageo's (DEO) H1 FY21 Earnings