In EMEA, nearly 50% of stores re-closed by the end of the fiscal third quarter. Currently, more than 60% of stores are closed in the EMEA region. However, in APAC, including Mainland China, all stores are open.

Shares of the company dipped 3.6% during pre-market trading, following the fiscal third-quarter results. The Zacks Rank #2 (Buy) company has gained 24.5% in the past three months compared with the industry’s growth of 17.2%. 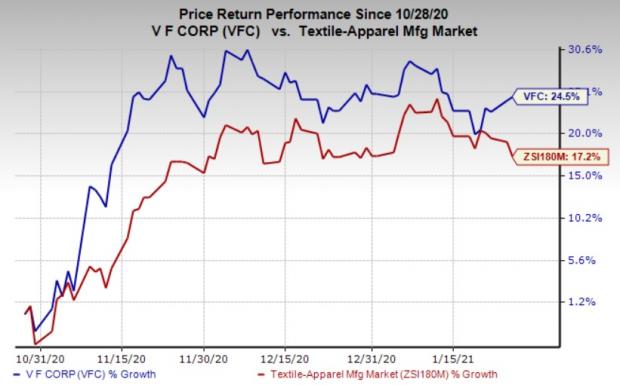 Nonetheless, it raised its outlook for fiscal 2021 based on encouraging business trends. Moreover, it is particularly gaining from strong business performance in digital and across China.

Net revenues of $2,971.5 million declined 6% year over year and missed the Zacks Consensus Estimate of $3,002 million. Constant-dollar revenues declined 8%. Revenues were mainly affected by store closures and lower consumer demand due to COVID-19 and related restrictions.

Revenues at the Active segment declined 9% to $1,127.1 million (down 11% in constant-currency basis). This included a 6% decline (an 8% decline in constant dollars) for the Vans brand.

Other revenues were $3.2 million compared with $6.1 million reported in the year-ago quarter.

In the reported quarter, the company returned $191 million to shareholders through dividend payouts. As part of its liquidity-preservation actions amid the coronavirus outbreak, it previously suspended its share-repurchase program on a temporary basis. Currently, it has $2.8 billion remaining under its current share-repurchase authorization.

Management noted that it is on track to return to growth in fourth-quarter fiscal 2021, with plans to accelerate growth in fiscal 2022. The company remains on track with its business transformation plans. Moreover, it stated that the fiscal third-quarter results were ahead of its expectations. Backed by these, the company raised its outlook for fiscal 2021.

It now anticipates adjusted earnings per share of $1.30, suggesting a 51% year-over-year decline. The revised view accounts for nearly 5 cents earnings contribution from the Supreme brand. Earlier, the company predicted earnings per share of $1.20, with a 55% year-over-year decline and a 56% decrease in constant currency. The company now expects to generate adjusted free cash flow of $650 million in fiscal 2021 versus the previously mentioned $600 million.

3 Other Top-Ranked Stocks to Watch

Crocs, Inc. (CROX - Free Report) has a long-term earnings growth rate of 15% and it sports a Zacks Rank #1 (Strong Buy) at present. You can see the complete list of today’s Zacks #1 Rank stocks here.