Adjusted earnings per share (barring one-time items) in the reported quarter were 15 cents, which missed the Zacks Consensus Estimate of 26 cents.

Revenues rose around 5% year over year to $811.3 million in the quarter. It surpassed the Zacks Consensus Estimate of $660 million. The company saw improved global demand and prices for methanol in the fourth quarter.

Adjusted EBITDA for the reported quarter was flat year over year at $136 million.

Average realized price for methanol was $282 per ton in the quarter, up roughly 10% from $256 in the prior-year quarter. Methanol industry supply outages and the delayed start-up of new industry capacity additions resulted in tighter market conditions and reduced global inventory levels in the fourth quarter, which coupled with higher demand led to an increase in methanol prices.

For the fourth quarter, cash flow from operating activities was $98 million, down around 14% year over year.

While Methanex is encouraged by sustained improvement in methanol demand and prices, it noted that the uncertain path for global economic recovery makes the near-term difficult to predict. The company believes that methanol industry fundamentals remain strong and demand for methanol will continue to improve as the global economy recovers. It remains focused on preserving liquidity and financial flexibility.

Methanex’s shares have lost 7.7% in the past year compared with the industry’s 23.2% rise. 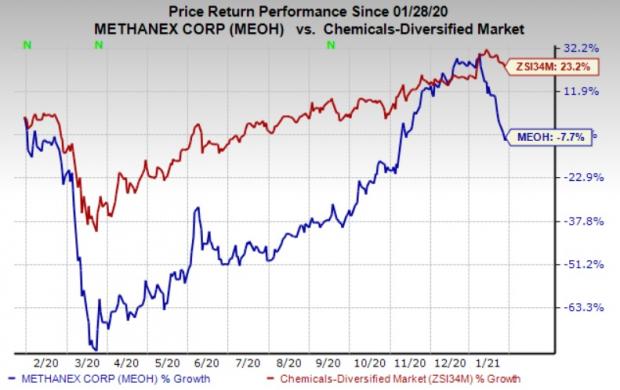 Impala Platinum has an expected earnings growth rate of 189.4% for the current fiscal. The company’s shares have rallied around 42% in the past year. It currently carries a Zacks Rank #1.

BHP Group has a projected earnings growth rate of 59.5% for the current fiscal year. The company’s shares have gained around 30% in a year. It currently carries a Zacks Rank #1.