The U.S. telecom stocks witnessed a steady uptrend over the past week backed by a renewed optimism about the Biden administration’s focused roadmap for growth and technology leadership. Allaying circumspection regarding the transitionary phase, the White House offered key insights about its broad telecommunications policy as it vouched to safeguard domestic networks from cyber espionage and potential threats from “untrusted vendors” that threaten national security. Rhode Island Governor Gina Raimondo, who has been nominated as the secretary of the Commerce Department by President Joe Biden, also called for a national 5G airwaves policy for a coordinated effort to bring the United States at the forefront of 5G race. A better-than-expected quarterly performance from hitherto reported companies proved to be an additional catalyst for the upward trajectory of the telecom sector.

Raimondo’s statements echoed the stance of the government and made it clear that federal laws would work in unison with other agencies to eliminate threats from China-based telecommunication firms like Huawei and ZTE, while encouraging trusted vendors to expand their production base. Even the departing FCC Chairman Ajit Pai corroborated the risks when he observed in his parting note that potential Chinese espionage attempts and threats to U.S. telecommunications networks are likely to be some of the biggest national security issues before the country. With water-tight legislations and sound policy guidelines, the Biden administration is expected to safeguard the interests of domestic telecommunications firms and maintain a tight leash on China-based entities to thwart such national security risks.

Meanwhile, in a joint letter to the White House and the Congress, 10 telecom industry associations have urged the administration to provide support for broadband skills training in any infrastructure legislation likely to be put forth by the government. The agencies expect that the wide proliferation of 5G communications will create around 3 million jobs for the economy, contributing about $500 billion annually to the exchequer. Consequently, appropriate apprenticeship program and broadband-related job skill developments that are ably supported by the government could help bridge the technology gap.

Regarding company-specific news, quarterly results, product launch and trials primarily took the center stage over the past five trading days.

Excluding non-recurring items, adjusted earnings were 75 cents per share compared with 89 cents in the year-earlier quarter. Adjusted earnings for the fourth quarter beat the Zacks Consensus Estimate by a couple of cents. Quarterly GAAP operating revenues decreased 2.4% year over year to $45,691 million, largely due to lower revenues from legacy wireline services, lower advertising and content revenues from WarnerMedia, domestic video and adverse currency translation effects. The top line, however, beat the consensus mark of $44,556 million.

3.     Corning Incorporated (GLW - Free Report) reported solid fourth-quarter 2020 results, wherein the top and the bottom lines beat the respective Zacks Consensus Estimate. Strong execution across the company’s portfolio drove growth in all segments. Corning is focused on operational excellence, cash flow generation and capital allocation. It expects the momentum across all businesses to continue in 2021.

Quarterly core net income came in at $462 million or 52 cents per share compared with $406 million or 46 cents per share in the prior-year quarter. The bottom line beat the Zacks Consensus Estimate by 4 cents, delivering a positive surprise of 8.3%. Quarterly GAAP net sales increased 18.9% year over year to $3,350 million, as each of the company’s businesses’ sales grew. The top line surpassed the consensus estimate of $3,216 million.

The solution, which will use Telia’s mobile network, is encrypted between the user and the drone. It will allow real-time drone video captures to be shared securely with multiple people. Site investigators will be able to follow live video feeds and monitor situations closely while improving quality assurance. It will also add new value to companies in a cost-effective and more environmentally-friendly way.

As part of the partnership, CMCC capitalized on the Finnish equipment vendor’s RAN Intelligent Controller along with its AirFrame Open Edge server platform to realize the concept of its “i-wireless-intelligent and simplicity 5G network”. These solutions will act as a doorway to a range of real-time data-driven network enhancements on the back of artificial intelligence and machine learning applications. 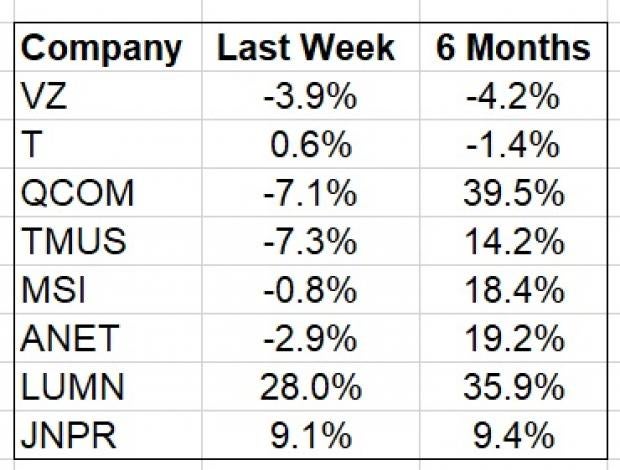 Over the past six months, the Zacks Telecommunications Services industry has rallied 0.8% on average and the S&P 500 has gained 16.3%. 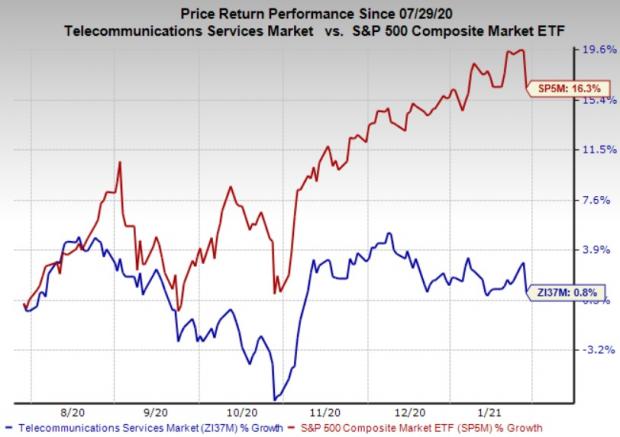 In addition to the 5G deployments and product launches, all eyes will remain glued to how the earnings season unfurls for the remaining companies within the sector.