Southwest Airlines (LUV - Free Report) also hit headlines following its management’s decision to revise the policy pertaining to emotional support animals on flights. The move was initiated after the U.S. Department of Transportation’s (DOT) decided to make the rule more rigid for passengers travelling with service animals on board.

1. United Airlines, currently carrying a Zacks Rank #3 (Hold), incurred a loss (excluding 6 cents from non-recurring items) of $7 per share in the fourth quarter of 2020, wider than the Zacks Consensus Estimate of a loss of $6.56. Results were hurt by the coronavirus-induced weakness in air-travel demand. Operating revenues of $3,412 million lagged the Zacks Consensus Estimate of $3,420.4 million. The top line also plunged 68.7% year over year due to a 75.7% drop in passenger revenues, which totaled $2,410 million in the reported quarter. However, cargo revenues surged 77.2% year over year to $560 million. Meanwhile, revenues from other sources declined 30.8% to $442 million. The carrier estimates total operating revenues to slump 65-70% year over year in the current quarter.

2. Alaska Air Group posted a loss of $2.55 per share (excluding 92 cents from non-recurring items) in the fourth quarter of 2020, narrower than the Zacks Consensus Estimate of a loss of $2.91. Revenues at Alaska Air came in at $808 million, surpassing the Zacks Consensus Estimate of $786.6 million. The top line, however, declined 63.7% year over year. Passenger revenues — contributing 81.3% to the top line — were down 68% on a year-over-year basis to $658 million due to weak travel demand.

3. Hawaiian Holdings’ fourth-quarter 2020 loss (excluding 21 cents from non-recurring items) of $3.71 per share was wider than the Zacks Consensus Estimate of a loss of $3.38. Moreover, quarterly revenues of $149.7 million tanked 78.9% year over year and also missed the Zacks Consensus Estimate of $151.4 million. Thanks to the COVID-19 pandemic, passenger revenues tumbled 85.9% year over year to $91.8 million.

4. From Mar 1, 2021, Southwest Airlines will allow only trained service dogs to accompany its passengers on flights. Per this updated policy, the carrier will no longer permit emotional support animals on board. However, passengers can be ferried with some animals as part of the carrier’s existing pets program for a fee. But this is possible only if the animals satisfy all applicable requirements regarding in-cabin stowage and species. Per the DOT’s new ruling, only dogs qualify as service animals. Going by this more stringent regulation, a service animal is defined as a “dog that is individually trained to do work or perform tasks for the benefit of a person with a disability”.

5. In a bid to offer its crew members outplacement support,JetBlue Airways (JBLU - Free Report) inked a deal with Randstad RiseSmart, a leading outplacement and talent mobility provider across the globe. Per the agreement, RiseSmart will support those JetBlue crewmembers who took voluntary opt-out packages last year as a result of the COVID-19 pandemic “in the next step of their careers”. 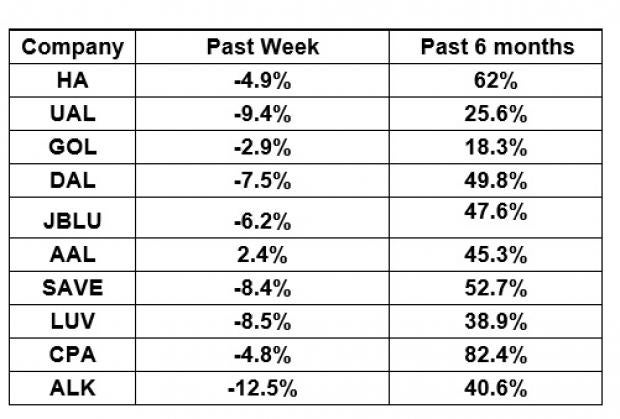