United States Steel Corporation (X - Free Report) recorded net income of $49 million or 22 cents per share in fourth-quarter 2020 compared with a loss of $668 million or $3.93 per share in the year-ago quarter.

Barring one-time items, adjusted loss per share was 27 cents compared with a loss of 64 cents in the prior-year quarter. The figure was narrower than the Zacks Consensus Estimate of a loss of 71 cents.

Revenues fell 9% year over year to $2,562 million in the reported quarter. However, it beat the Zacks Consensus Estimate of $2,537.5 million.

The company benefited from its cost-management actions and higher prices in the quarter.

U.S. Steel Europe: The segment posted profits of $36 million against a loss of $30 million in the year-ago quarter. Shipments in the segment rose around 11% year over year to 840,000 tons. Average realized price per ton for the unit was $652, up around 5% year over year.

Tubular:  Loss in the segment was $32 million, narrower than a loss of $46 million in the year-ago quarter.

Revenues dropped around 24% year over year to roughly $9,741 million for the full year.

The company noted that its performance continues to strengthen as it entered the new year. It is optimistic that the market will continue to be driven by strong demand, low inventories, and supportive raw material prices.

With the buyout of the remaining stake in Big River Steel, U.S. Steel is well placed to drive significant earnings growth and deliver an unmatched value proposition to its customers.

The company’s shares rallied 101% in the past a year, outperforming the industry’s 22.9% rise. 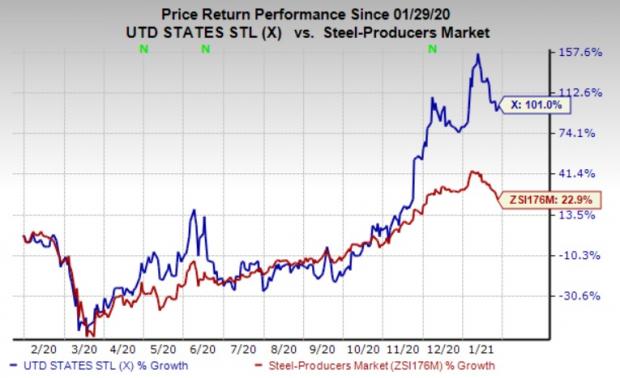 Impala Platinum has an expected earnings growth rate of 189.4% for the current fiscal. The company’s shares have rallied around 44% in the past year. It currently carries a Zacks Rank #1.

BHP Group has a projected earnings growth rate of 59.5% for the current fiscal year. The company’s shares have gained around 31% in a year. It currently carries a Zacks Rank #1.