Last week, U.S. President Biden pledged to phase out the U.S. government’s vehicle fleet — including cars, trucks and sports utility vehicles — and swap it with clean electric vehicles (EVs) made in America, in line with his promise of creating more than 1 million new jobs in the auto sector as well as the zero-emission target. The transition of the entire government fleet to EVs is set to provide huge opportunities to pure-play EV makers. As it is, with electric trends getting hotter with each passing day, various auto biggies are ramping up electrification goals. Importantly, last week, U.S. auto giant General Motors (GM - Free Report) announced its aim of attaining carbon neutrality in global products and operations by 2040. The company targets to get rid of tailpipe emissions in new light-duty vehicles by 2035.

Meanwhile, fourth-quarter earnings for the Auto sector kicked off last week. Two of the S&P auto firms including Tesla (TSLA - Free Report) and PACCAR (PCAR - Free Report) came out with their quarterly results. While both the Zacks Rank #3 (Hold) companies lagged earnings estimates, they managed to beat the top-line mark. You can see the complete list of today’s Zacks #1 Rank (Strong Buy) stocks here.

Tesla reported earnings of 80 cents for fourth-quarter 2020, which lagged the Zacks Consensus Estimate of 90 cents per share. Nonetheless, the bottom line compared favorably with the year-ago earnings of 43 cents a share. Importantly, the firm posted first annual net profit in 2020. Total revenues came in at $10,744 million, surpassing the consensus mark of $10,129 million. The top line also witnessed year-over-year growth of 45.5%. While the company almost met the vehicle delivery target for 2020, it crushed investors’ hopes by not providing any clear delivery target for 2021. Instead, the company just released a statement saying that it anticipates achieving 50% average annual growth in vehicle deliveries over a multi-year horizon.

General Motors inked a deal with Navistar International (NAV - Free Report) , per which it will supply fuel-cell electric-vehicle technology to the latter for bringing more hydrogen-powered long-haul trucks on the road. The Detroit Auto biggie will provide a line-up of zero-emission big rigs, which are more cost-effective than diesel in core segments of the industry. The deal will expand the company’s vision of a world with zero emissions from passenger vehicles to the truck market. The deal is also in sync with Navistar’s deepened focus on hydrogen fuel cell electric vehicles, which it considers as the ultimate green transportation. The company views the technology as a more efficient alternative to battery power for electric cars.The collaboration between the two firms is aimed at providing an all-inclusive one-stop solution for fleet customers seeking to buy zero-emission hydrogen fuel cell trucks.

Autoliv, Inc. (ALV - Free Report) reported fourth-quarter 2020 adjusted earnings of $2.19 per share, which topped the Zacks Consensus Estimate of $2.05. The bottom line was also higher than $1.84 per share recorded in the year-ago quarter. Robust demand for Autoliv’s products and cost-cut efforts resulted in improved year-over-year performance. The company reported net sales of $2,517 million for the quarter, up from the prior-year figure of $2,192 million. Moreover, the figure beat the Zacks Consensus Estimate of $2,453 million. Autoliv expects full-year 2021 net sales to rise 25% year over year. Adjusted operating margin is expected to be 10%. Operating cash flow for 2021 is envisioned to be on par with 2020 levels.

Oshkosh Corporation (OSK - Free Report) reported first-quarter fiscal 2021 (ended Dec 31, 2020) adjusted earnings of $1.13 per share, up from $1.1 recorded in the year-ago period. Moreover, fiscal first-quarter earnings surpassed the Zacks Consensus Estimate of 69 cents. Net sales declined 7% from the prior-year period to $1,577 million but surpassed the Zacks Consensus Estimate of $1,519 million. Oshkosh had cash and cash equivalents of $898.6 million as of Dec 31, 2020, up from $264 million reported in the prior-year period. The company recorded a long-term debt of $818.1 million as of Dec 31, 2020, slightly down from $819.2 million on Dec 31, 2019. Oshkosh anticipates improvement in end markets served and is optimistic to grow through fiscal 2021. 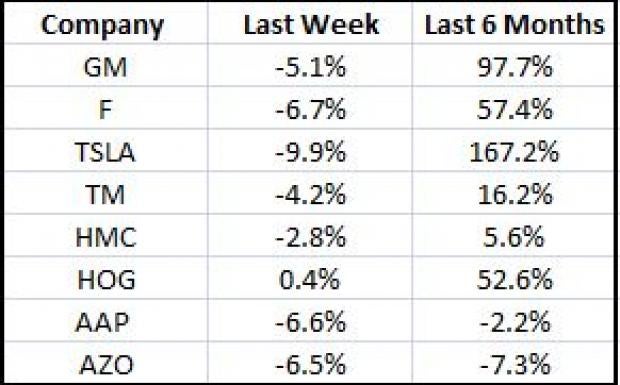 Car enthusiasts will be keeping a close watch on January 2021 U.S. car sales, which will be coming out this week. Investors in the auto sector would be closely tracking the sales reports of auto biggies including General Motors, Ford, Volkswagen, Honda and Toyota. Meanwhile, they will also await the quarterly releases of auto biggies like Ford, Cummins, Harley-Davidson and others that are scheduled to report quarterly results during the week.