For Washington Federal, its long-term issuer rating is Baa1, while for WaFd Bank, its long and short-term deposit ratings are A1/Prime-1. The bank has been assigned a stand-alone baseline credit assessment (“BCA”) of a3. Moreover, Moody’s has assigned a stable rating outlook to both the company and its subsidiary.

Rationale Behind the Ratings

Per Moody’s, Washington Federal has a healthy funding and liquidity profile along with a robust capitalization, which supports its ratings.

While the company’s capital levels have declined over the past few years, it has been accompanied by a significant decline in its historic interest rate risk, which resulted from the diversification efforts undertaken by the bank.

Also, while the low interest rate environment and higher provisions put pressure on Washington Federal’s profitability in 2020 like other banks, its constant effort to shift deposit mix toward money market and non-interest bearing deposits are expected to help in mitigating interest rate risk and aid the bottom line, going forward.

The company’s efforts to transition into a more diversified commercial lender along with elevated costs because of technology spending on important digitization initiatives have resulted in weaker operational efficiency in the past. But Moody's does not expect the company’s cost/income ratio to deteriorate any further.

Notably, the ratings that Moody’s has assigned take into consideration the credit challenges faced by Washington Federal. The bank has a high concentration of commercial real estate (“CRE”) loans, with construction loans in particular.

Nevertheless, the company’s solid credit quality is a key positive. It has been reporting net recoveries on an annual basis since 2014. Also, its annual net charge-offs as a percentage of average total loans have remained significantly below the level of all FDIC-insured banks since before the 2008 financial crisis.

Moody’s assigned a stable outlook to the ratings because it is of the opinion that the company’s credit profile will remain stable over the next 12-18 months and that its profitability will continue to remain under pressure amid the low interest-rate environment.

When can the Ratings be Upgraded?

Ratings might be upgraded if there is a reduction in the company’s concentration risk, specifically lower CRE and construction concentrations, all else being equal. Also, if the company uses significantly lower FHLB financing due to material improvement in its deposit mix, upward pressure on ratings might emerge.

What could Result in Downward Rating Pressure?

Ratings could be downgraded if there is a continued reduction in Washington Federal’s capitalization or if its credit quality becomes significantly weak.

Shares of the company have gained 13.7% over the past six months compared with 38.4% growth recorded by the industry. 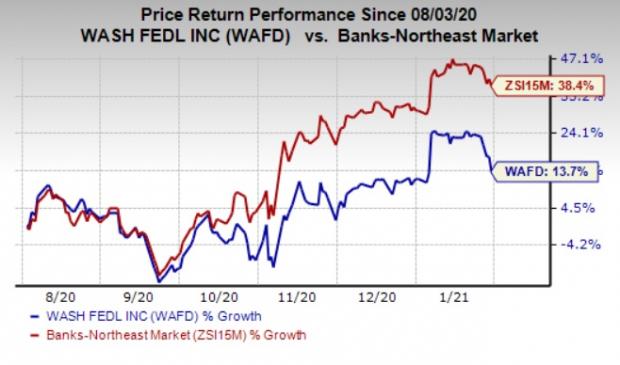 Rating Actions by Moody’s on Other Banks