Meanwhile, revenues of $1.62 billion surpassed the Zacks Consensus Estimate of $1.58 billion, comprising almost fully of CF product revenues. The company recorded minimal collaborative revenues during the reported quarter. Total revenues rose 15% year over year, driven by the rapid uptake of Trikafta, a triple combination regimen, in the United States as well in Europe. Moreover, higher international revenues due to the reimbursement approvals received for Orkambi and Symkevi in some international markets also drove total revenues.

Shares of Vertex have lost 1.9% in the year so far against the industry’s increase of 6.4%. 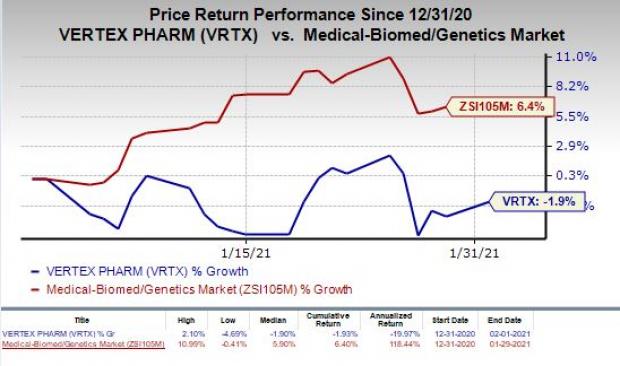 Trikafta generated sales worth $1.09 billion, compared with $960 million in the third quarter of 2020. The drug has seen solid uptake in the United States since its launch in October 2019 and has been a key growth driver for Vertex. Trikafta was approved by the brand name of Kaftrio in Europe in August 2020, which too contributed to international revenues in the reported quarter.

On the fourth-quarter earnings call, management stated that the marketing authorization in Germany, portfolio agreements in Ireland and Denmark, and reimbursement deal in the United Kingdom helped thousands of patients across the EU to gain access to Kaftrio.

Symdeko/Symkevi registered sales of $128 million in the quarter, down 61.4% year over year.

For the same period, the company reported earnings of $10.32 per share, up 94% year over year.

Adjusted research and development (R&D) expenses rose 8% to $364 million in the quarter due to expansion of CF and non-CF pipeline.

Adjusted selling, general and administrative (SG&A) expenses increased 10.1% to $175 million in the reported quarter due to investments made to support the expansion of the CF business.

We note that, in 2021, approval of Trikafta/Kaftrio in additional geographies, reimbursement agreements for Kaftrio in EU countries, and approval of all CF medicines for younger patient populations and additional mutations are expected to bring in additional revenues for Vertex.

In December 2020, Vertex along with partner CRISPR Therapeutics (CRSP - Free Report) , announced that their CRISPR/Cas9 gene-editing therapy candidate, CTX001, has demonstrated a consistent and sustained response to treatment in patients with transfusion-dependent beta thalassemia as well as patients with sickle cell disease.

The companies had entered into a strategic research collaboration in 2015 to co-develop and co-commercialize CTX001. Per the agreement, they equally share all R&D costs and profits worldwide.

Meanwhile, the FDA cleared Vertex’s investigational new drug application for VX-880, its first cell therapy for type 1 diabetes. The company plans to begin a phase I/II study on the same in the first half of 2021.

Also, in December 2020, Vertex entered into a strategic research and licensing agreement with privately held company Skyhawk Therapeutics to discover and develop novel small molecules that modulate ribonucleic acid splicing for the treatment of serious diseases.

Vertex currently has a Zacks Rank #3 (Hold). A better-ranked stock in the biotech sector is Blueprint Medicines Corporation (BPMC - Free Report) , which has a Zacks Rank #2 (Buy). You can see the complete list of today’s Zacks #1 Rank (Strong Buy) stocks here.

Blueprint Medicines’ loss per share estimates have narrowed 1.6% for 2021 over the past 60 days.

Cigna (CI) to Report Q4 Earnings: What's in the Offing?