However, in order to prevent any more run-ins with the law, MVP planned to reset the permitting procedure that hampers the completion of the natural gas pipeline.

MVP stretches approximately 303 miles from Northwestern West Virginia to Southern Virginia as an interstate pipeline regulated by the Federal Energy Regulatory Commission (“FERC”). It has a diameter of up to 42 inches and is expected to have a transmission capacity of 2 billion cubic feet (Bcf) per day to markets in several regions of the United States.

Equitrans stated that MVP will acquire individual crossing permits from the Army Corps of Engineers of the United States. Notably, the individual permits rendered critical as project opponents issued the Nationwide Permit program, which covered all streams and wetlands crossings under one authorization. Most analysts opine that these individual permits could delay the initiation of the pipeline from late 2021 to 2022 as it is a more expensive and lengthy process.

Most recently, the Virginia Department of Environmental Quality needed pipelines with a larger diameter to seek individual stream-crossing permits rather than using the Nationwide Permit program. Despite the latest setback, MVP assured to complete the pipeline installation on schedule with estimated costs of $5.8-$6 billion.

Equitrans hopes that the shift to individual permits will induce an efficient and effective path to project completion. Importantly, these permits will involve a more accurate, stream-by-stream analysis and several environmental groups claimed that this new permit procedure could further delay the largest natural gas pipeline construction in Virginia.

The company’s shares have underperformed the industry in the past three months. Its stock has gained 0.3% compared with the industry’s 22.6% growth. 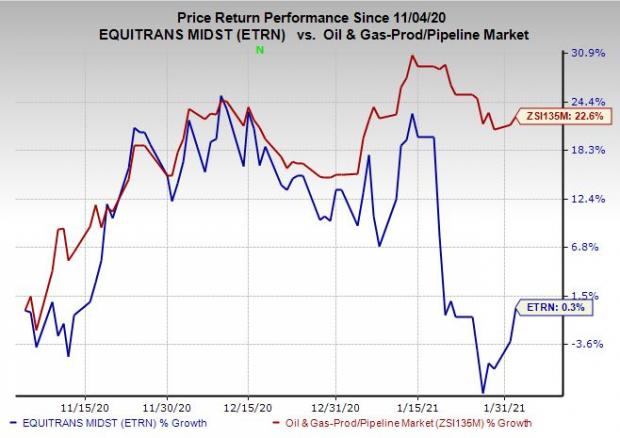