Revenues in the reported quarter came in at $2.85 billion, down 22% from the year-ago quarter, hurt by lower sales of multiple sclerosis (“MS”) drug Tecfidera and spinal muscular atrophy (“SMA”) drug, Spinraza. Sales, however, beat the Zacks Consensus Estimate of $2.82 billion.

Biogen’s MS revenues were $1.81 billion in the reporter quarter, including Ocrevus royalties, which declined 24% year over year. Biogen receives royalties on U.S. sales of Roche’s Ocrevus.

Tecfidera sales declined 47.6% to $607.9 million in the quarter, hurt by the launch of multiple generic products in the United States.

Notably, in June and September 2020, district courts in West Virginia and Delaware, respectively, invalidated the ‘514 patent related to Tecfidera in lawsuits filed by several generic makers including Mylan , opening doors for early generic competition. The ‘514 patent covers the treatment of multiple sclerosis with 480mg dose of dimethyl fumarate, the active ingredient of Tecfidera. Multiple generic versions of the drug were launched, which significantly hurt sales of the drug.

Vumerity, launched in the United States late in 2019, recorded $38.9 million in sales, higher than $15 million in the previous quarter. The launch uptake of the drug has been slow due to lower new patient starts and switches due to the COVID-19 pandemic.

Combined interferon revenues (Avonex and Plegridy) in the quarter were $456 million, down 11.7% year over year. Avonex revenues declined 13.3% from the year-ago quarter to $356.4 million. Plegridy contributed $99.6 million to revenues, down 5.6% year over year.

For the same period, the company reported earnings of $33.70 per share, almost flat year over year.

The company expects total revenues in the range of $10.45-$10.75 billion in 2021. The Zacks Consensus Estimate stands at $11.12 billion. With multiple generic versions of Tecfidera now launched, the company expects a significant erosion of the drug’s sales during the first half of 2021.

Earnings per share are expected between $17 and $18.50. The Zacks Consensus Estimate is pegged at $24.54 per share. Capital expenditures are anticipated between $375-$425 million.

Notably, the guidance assumes the approval of Biogen’s controversial Alzheimer’s drug, aducanumab, in the United States by Jun 7, 2021. However, uncertainty looms large on the FDA’s final decision. Upon potential approval, the company plans to launch the drug immediately. Though the company expects only modest revenues in 2021, the same might ramp up thereafter.

We remind investors that FDA’s decision on aducanumab was earlier expected on Mar 7. However, last month, the FDA extended the review period by three months and will now give its decision on Jun 7.

In November 2020, an FDA advisory committee voted against approving aducanumab for Alzheimer’s disease. Aducanumab is also under regulatory review in Japan and Europe.

Biogen missed estimates while beat on revenues. The stock declined in pre-market trading due to an unimpressive guidance for 2021 as it may have hurt investors’ sentiments. However, Biogen’s stock has rallied 13.4% so far this year, compared with the industry’s increase of 7.9%. 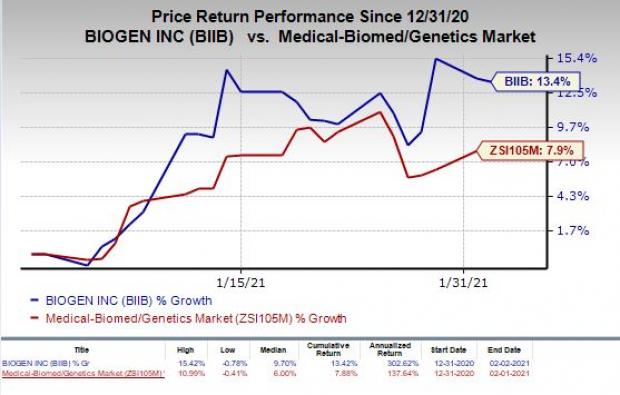 The earlier-than-expected launch of Tecfidera generics significantly hurt sales of Biogen’s branded drug and resulted in year-over-year decline in revenues. Meanwhile, sales of Spinraza are being hurt due to COVID-19 and the drug’s competitive environment is also getting challenging. The initial rollout of Vumerity has been slow due to COVID-19 and this, coupled with Tecfidera generic entrants, makes the future of Biogen’s MS franchise uncertain.

Also, if aducanumab is approved by the FDA, it will become the first medicine to be approved to reduce the clinical decline associated with this devastating disease, which can open up a huge market opportunity for Biogen.