Ford (F - Free Report) recently announced plans to expand its manufacturing operations in South Africa. The auto giant will spend $1.05 billion (R15.8 billion) and create additional jobs over the coming years in the nation as part of its expansion plans.  This is the largest investment the U.S. automaker has made in South Africa in its 97-year history in the country. It will also form one of the largest-ever investments in the South African automotive industry.

The overall investment encompasses $686 million (R10.3 billion) to be laid out for significant upgrades as well as for developing modern and new state-of-the-art manufacturing technologies at Ford’s Silverton Assembly Plant. This is being done with the aim to boost production volume and fuel substantial growth in efficiency and quality across the company’s entire South African operation. The investment will also involve creation of two new facilities at the Silverton Plant — the construction of a body shop with the latest robotic technology and a high-tech stamping plant. Both these facilities will improve the quality and reduce the overall cost and wastage at the plant.

Ford also will invest US$365 million (R5.5 billion) to upgrade tooling at its major supplier factories.

Ford anticipates that the latest investment will support its Silverton Assembly Plant to generate revenues exceeding 1.1% of South Africa’s gross domestic product. In fact, the investment will help Ford to boost its annual installed capacity at the Silverton plant from 168,000 vehicles to 200,000 vehicles. The expanded production will create additional 1,200 jobs with Ford in South Africa, elevating the local workforce to 5,500 employees, while adding an estimated 10,000 new jobs across the auto giant’s supplier network.

The investment will also enable the production of the all-new Ford Ranger pick-up truck for the domestic market as well as for export to global markets. Moreover, the plant will manufacture Volkswagen (VWAGY - Free Report) pick-up trucks as part of the strategic alliance between Ford and Volkswagen.

The new investment program is based on the recently-announced Project Blue Oval renewable energy project, which is in sync with Ford’s global target of using 100% locally-sourced renewable energy for all its manufacturing plants by 2035 and achieving carbon neutrality by 2050. Ford, in fact, is aimed at making the Silverton plant entirely energy self-sufficient and carbon neutral by 2024, making it the first Ford plant worldwide to achieve the “Island Mode” status.

As part of the investment, Ford is also building a new Ford-owned and operated chassis line in the Tshwane Automotive Special Economic Zone (TASEZ). This will significantly bring down logistics costs and complexity for the auto biggie, while improving efficiency at the same time. Additionally, Ford’s private-public partnership with all three spheres of government in the TASEZ is a critical step toward implementing the new production capacity.

With the latest investment, Ford joins forces with other global carmakers, including Volkswagen, Toyota (TM - Free Report) and Nissan (NSANY - Free Report) , in ramping up production in Africa, which is a large, untapped market for new car sales.

South Africa has big aspirations for its automotive sector, development of which will help revive the nation’s economy and reduce unemployment via industrialization.

Ford’s investment in South Africa manufacturing operations underlines the company’s commitment to deliver ever-better vehicles to its customers in the region as well as has helped bring many automotive component suppliers to the country, thus fostering its economy.

Notably, shares of Ford have appreciated 34.8% in the past year, while its industry has soared 262.2%. 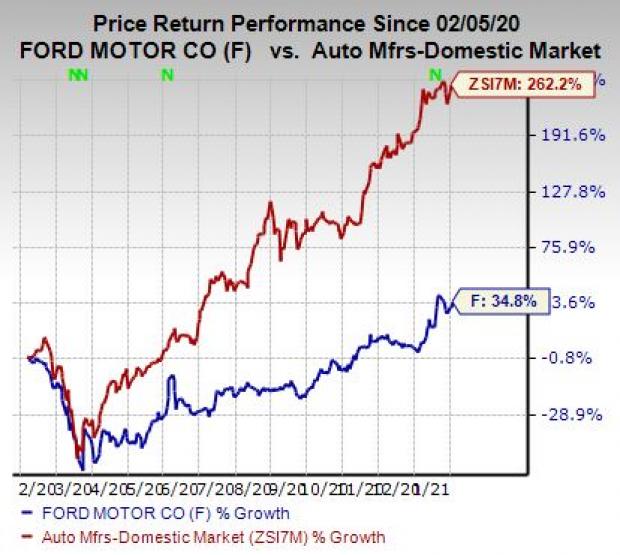