It seems that the better-than-expected figures impressed the market as the stock increased 2.9% since earnings release on Feb 2. In the past year, the stock has lost 8.3% compared with 0.6% decline of the industry it belongs to. 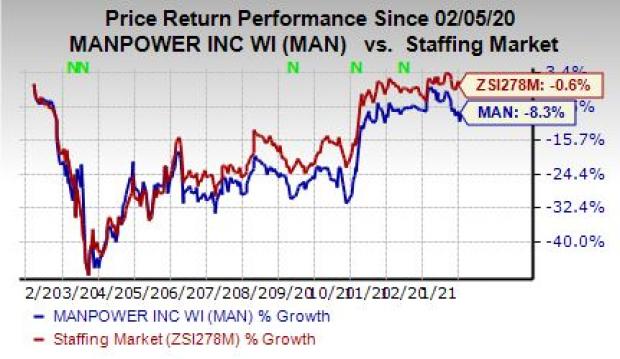 Quarterly adjusted earnings of $1.48 per share (excluding 15 cents from non-recurring items) beat the consensus mark by 31%. However, the bottom line declined 31.2% year over year.

Revenues of $5.05 billion also beat the consensus mark by 7%. The top line fell 3% year over year on a reported basis and 6% on a constant-currency (cc) basis.

Northern Europe revenues slipped 6.7% on a reported basis and 10.6% at cc to $1.09 billion. The segment contributed 21.8% to total revenues in the quarter.

ManpowerGroup exited the quarter with cash and cash equivalents balance of $1.56 billion compared with the prior quarter’s level of $1.58 billion. Long-term debt at the end of the quarter was $1.10 billion compared with the $1.05 billion reported in the preceding quarter. You can see the complete list of today’s Zacks #1 (Strong Buy) Rank stocks here.

The company generated $220.7 million of cash from operating activities, and Capex was $20.2 million in the quarter.

The company expects revenues to be down in the mid-single-digit percentage range on a constant-currency basis. Earnings per share are anticipated in the range of 64-72 cents. The midpoint (68 cents) is lower than the Zacks Consensus Estimate of 70 cents per share. Moreover, operating profit margin during the first quarter is expected to be down 50 bps compared with prior-year quarter’s levels.

Rollins’ (ROL - Free Report) fourth-quarter 2020 adjusted earnings of 13 cents per share came ahead of the consensus estimate and rose from the year-ago quarter’s tally by 18.2%. Revenues of $536.3 million beat the consensus mark by 1.7% and increased 6% year over year.

IHS Markit’s (INFO - Free Report) fourth-quarter fiscal 2020 adjusted earnings per share of 72 cents beat the Zacks Consensus Esimate by 7.5% and increased 11% on a year-over-year basis. Total revenues came in at $1.11 billion, marginally missing the consensus mark and declining 1% from the year-ago quarter’s levels on a reported basis.